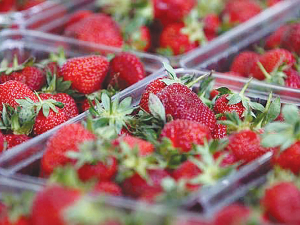 This may include expanding its $8.8m export industry.

Ahern explains that newcomers to the industry have different growing seasons and they are prolonging the season.

“There will be export volumes at times of the year when we don’t produce at the moment. So that’s a positive,” he told Hort News.

Current production is intensely seasonal, with a big surge from October to early December.

“We would love to develop more export markets around that pre-Christmas time just to take the pressure off the local situation. One of the benefits of the booming trade is we have a lot more flights coming into the country… and then going out more importantly, to a huge range of destinations.

“Everything has to be airfreighted with strawberries, it is not a sea-freight product. There are freight possibilities that we could have only dreamed of 30 years ago.”

The proposed compulsory levy received 84% support on an individual grower basis and 71% on a weighted volume basis. Voter return was 30.67% by number of eligible voters and an estimated 71.99% by weight. This now allows Strawberries NZ to proceed with an application to the Minister of Agriculture.

Ahern hopes that approval will come through by Christmas, with final legislation in place by the end of February, so the new funding mechanism can be introduced by the new season.

Another key issue behind the levy proposal for Strawberry Growers NZ is that it is currently funded by one dominant plant producer which is a 100% subsidiary of the industry body, Ahern says.

“There are new entrants and we want to bring those new entrants into the fold, into the church. There are new ideas, new ways of growing, new plant material and therefore this system that has worked very well in the past may not be appropriate going forward.

“The board has decided now to go out and broaden the catchment of members and so everybody gets to pay, which is a fairer system. When we have canvassed newcomers, they are quite keen on the idea.

“Obviously growers quite like the idea as well because they have voted accordingly.

“It is genuinely intended to be a more inclusive industry where everybody now pays the industry good component.”

The levy funds will be spent in the specific areas outlined in the consultation document (visit www.strawbsnz.co.nz) because that document is all important when seeking a commodity levy, he told Hort News.

“It is where all the questions should be answered if anyone needs to know.

“There we are talking about matters that are of genuinely common interest. If there are areas which might apply to Tom and Dick but not Harry then generally speaking we are not going there.

“We need to get involved in things that actually affect everyone. Biosecurity is a big issue, so is provision of labour -- it is a monster in fact -- food safety regulations and compliance, and export market access.

“There are a few others but those ones have to be done on a collective basis and they are best done so. No individual operator could really take on those issues by themselves.

“That mainly involves working with government agencies who want to deal with a single body as well.

“All of that requires expertise: you’ve got to run the place, you’ve got to keep up to speed, you might have to contract specialist knowledge and services, and there are endless meetings in Wellington which all costs money.

“No one really like levies, let’s face it. If it is articulated to them that it is not excessive and it is about right for what they need to do collectively then they will sign on.”

Strawberries Growers NZ is “pretty pleased” with the result of the levy vote, which came after extensive consultation, says Ahern.

Only 50% were needed for both votes.

“You really need to have pretty good numbers. Even though technically you need 50% I don’t think anyone would like to have 51%,” he said.

Ahern says there are much greater governance demands when you are granted a levy by the Government which is similar to “the power to tax your constituents”.

“It is fairly powerful, there are obviously strings that go with that,” he explained.

“There are a bunch of rules the board will need to comply with every year by way of information and reporting to the minister to be sure you are behaving yourself and acting in accordance with the detailed rules of running a commodity levy.

“That leads to greater transparency because a key part of the operation of a commodity levy is the reporting that you do at your annual meeting. That has to be really well organised, a budget for the new year has to be laid out and that has to be approved by the growers every year.”

Strawberry Growers NZ has over 70 paid up members which account for about 75% of total production. The levy is expected to raise about $375,000 per year. Voting closed on July 12.

The horticulture industry has come out of the Covid-19 lockdown more resilient and with better people management skills.