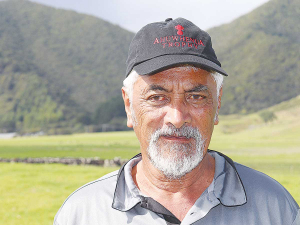 Tunapahore B2A Incorporation chairman Jack Mihaere was delighted with the large turnout that came along to their field day last week.

Jack Mihaere says he had a sleepless night preparing for the field day.

However, the Tunapahore B2A Incorporation chairman was delighted with the large turnout and not surprised at how many people came along.

Mihaere says the day involved a lot of work by a lot of people and singles out his sister Repeka as a key person in organising the event.

The farm, the marae and church at Torere are located right on the coast with stunning vistas of the sea, including Whakaari/White Island in the distance. The hills, which rise steeply from the narrow coastal strip, are covered in a mix of native trees and commercial forestry. All along the coast there are pockets of kiwifruit, which are slowly replacing maize crops.

The beauty of the setting drew many positive comments from the farmers, rural professionals, agribusiness leaders and government officials who attended the day. The guests were welcomed on to the Torere Marae by local Kaumatua and Mihaere. Later they listened to by the committee of management, advisors and farm staff, and then taken by bus a few kilometres down the road to see the actual farm.

The property consists of 400.83ha of land, but the actual milking platform is 132ha running 385 cows that produce 125,940 kgMS. Other land is leased for maize silage production.

In July 2008, a 5.54ha kiwifruit orchard was purchased by the incorporation and now consists mainly of SunGold G3 and some green Haywards. The orchard consistently produces great fruit and is one of the top producers for both EastPack and Zespri. The incorporation also has shares in Whakatohea Mussels (Opotiki) Limited, Fonterra, Zespri, Ballance, Farmlands and EastPack Limited.

During the 1930s-1950s, Tunpahore B2A was a dairy and drystock unit, but when the milker died in a car accident, the management decided to sell the dairy herd with the land leased to surrounding land owners. Later, it reverted back to being a dairy farm, but - as Mihaere explained - they struck a crisis in 2018 when their sharemilker suddenly left.

"In the space of six weeks we had to buy a herd, find a manager and a milker and all the equipment to run the farm and somehow we managed to do this," he told the crowd. "We had to buy cows from all around the region, but we did it."

However, it quickly became evident that they needed to buy in extra feed to keep the cows in good condition and they found later that their empty cow rate was 31%.

"We realised we needed help and we have solved the problem by feeding our cows better and now we have got the empty rate down to about 12%."

The farm's current manager is Janet Poihipi, who has worked for a number of years on the farm under previous sharemilkers and is regarded as an absolute asset to the incorporation.

She concedes, in terms of the actual field day, she did little by way of organising but admits being nervous abour how it might run.

"I just carried on with the farm work as usual. The farm is my pride and joy," Poihipi says.

"I started off as relief milker in 2005 and then worked my way up to be the 2IC.

"When the previous sharemilker left they employed a new manager from the Waikato, but he got quite sick and I ended up doing this and my job, which was really quite hard. I love the work and the cows - they are my babies and when they hear my voice they just come, so I don't need to use the backing gate."

Jack Mihaere says it was a last minute decision to enter the competition.

He and others from the incorporation were attending a field day, last year, at Matapihi for a finalist of the Ahuwhenua Trophy competition for horticulture.

"We were thinking about entering and when we saw what Ngai Tukairangi had done, we decided we would have a go," he adds. "We only had four days to put in their entry and are very pleased we did."

Ahuwhenua Trophy Management Committee, which runs the competition, chair Kingi Smiler says the field day at Tunapahore B2A Incorporation was excellent and shows the tremendous effort the incorporation has put into making a success of their land.

He says the committee of management, which run the operation, are part of an Eastern Bay of Plenty Māori dairy cluster.

This is a DairyNZ/MPI initiative that provides a learning network and access to resources and professional support.

Smiler says the diversification programme being undertaken by the incorporation shows the vision and the business acumen of Tunapahore B2A Incorporation. He believes this - and the field days at the other two finalist farms - have done an excellent job in positively showcasing Māori agribusiness to both fellow Māori and the wider rural sector.

"This year we have quite a diverse group of finalists in the competition and there is significant emphasis on their environmental practices," Smiler adds.

"We are also seeing with a couple of the finalists coming through a development phase, where they are starting to optimise their farms a lot better and also train their own people. I think that is real strength of this year's competition."

"We are also seeing with a couple of the finalists coming through aa development phase, where they are starting to optimise their farms a lot better and also train their own people. I think that is real strength of this year's competition."

Smiler says Māori are making a major contribution to the economy and that recognition of this will come over time.

He believes the real issue is that as long as the people, and the communities are doing well, that's acceptable and this is showing through in the competition.

The winner of the Ahuwhenua Trophy for dairy will be announced in New Plymouth on May 14.