Sheep and beef doing its bit 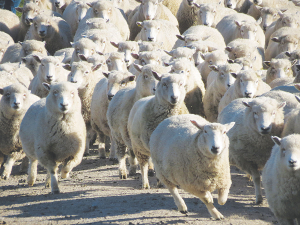 No increase in stock numbers in the sheep and beef sector is anticipated as the industry moves towards carbon neutrality, says Beef + Lamb NZ head of nutrition Fiona Windle.

She told the Climate Change and Business Conference in Auckland this month that the sector is very clear on where it is heading on the environment.

“We acknowledge it is very much a journey and a stepwise process to bring all the farms on board. By 2021 all 11,000 farms should have an environmental plan in place,” she said.

Half of these have been achieved already.

She says carbon neutrality will be achieved by a combination of factors including improved technology, advanced animal genetics and improved on farm practices she told the conference, organised by the Environmental Defence Society.

“A big chunk of that is a reduction in sheep numbers. In the 1990s numbers were at 50 million. That is now down to 27 million. So that is a huge chunk of the emissions pie and we are not planning to increase livestock numbers at this point.

“Another factor on carbon sequestration is that we have quantified the trees on our sheep and beef properties. There are currently 1.4 million hectares of native forest on our farms as well as 180,000ha in pines,” Windle explained.

“That needs to be factored into the equation when we look at our whole emissions profile. We are just currently quantifying how much of our other emissions will be offset or sequestered by those trees. It is looking to be well over half.”

Questions have been raised about whether the sector could convert some land to crops to support the growing plant protein sector.

“We have had that measured. AsureQuality quantified it and 7% of our land that is currently growing beef and sheep could be converted. But the majority of that is already in [some form of] plant growing. It is all about that right land purpose,” Windle said.

She says the sheep sector is a true value added story. While sheep numbers have been reducing since 1990 the value of export lamb has doubled in that time.

“So it’s a very efficient system and that has been recognised on the world stage.”

“A strong component of that is as our rural communities.

“And as a reminder about our production of beef and lamb: we aren’t increasing production at this point so we now feed 40 million people around the world. That is about 0.5% of the global population.

“We’re not going to increase production so we won’t increase emissions anymore.

“There is a huge, growing demand for grass-fed beef. So there’s an opportunity for our product particularly in the US where we have opened up more markets in California.”

Cows and pasture are not the villains in climate change, but could instead be our saviours, says Hawke’s Bay farmer, soil scientist and consultant Phyllis Tichinin.