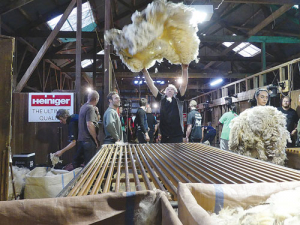 The Herlihy family’s 24-hour charity Shearathon, raising money for mental health and suicide prevention in the shearing industry, could become an annual fixture following the success of the recent North Canterbury event.

Organiser Mark Herlihy said it raised a provisional $44,000 for Lifeline, Christchurch’s He Waka Tapu, Through the Other Side Trust and the Taranaki Retreat Trust.

The Shearathon started at 10am on Friday March 23 and ended with an auction of donated goods and services on the Saturday morning. They tallied 3222 sheep shorn for local farmers Tim Hawke and Duncan McIntosh. Hawke’s Okuku woolshed was the venue.

Herlihy said the $44,000 was made up of the shearing fees plus just over $17,800 from the auction, $4000 from a Givealittle page, cash donations and sponsorship.

The Taranaki Herlihy family is well known in shearing circles, veteran shearer John having been joined in the industry by all six of his sons. They were only a couple of weeks away from attempting a unique brothers’ shearing record in early 2016 when the youngest, Michael (20) took his own life.

The family responded by organising their first Shearathon, in Taranaki in 2017, raising $23,000 for charity.

“This was our second and everyone’s asked when we are doing the next one so definitely we’ll be doing another one,” said Mark Herlihy.

“We might do some more in another district and get them involved and get behind us.”

He said at least 50 machine shearers and at least seven or eight blade shearers took part. Along with wool handlers and pressers, cooks and others there were well over 100 volunteers.

“Even getting the sheep in,” said Herlihy.

“We had the trucks there in the middle of the night chucking sheep in for us.

“There were probably 10 people out there loading and unloading trucks.”

Farmer's Chaplain columnist, Colin Miller on the importance of slowing down.