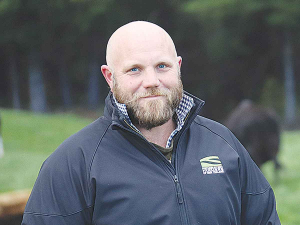 Aaron Passey says sharemilkers need to have good business acumen if they are to succeed in the dairy industry.

He told Dairy News this is a skill that is sometimes lacking among sharemilkers and one that needs to improve.

Passey says business acumen is an area where many new sharemilkers come unstuck. They have jumped at the opportunity of entering the industry, but haven’t necessarily done background budgets. He says, if they did this, it would be clear whether they would be financially better off staying as a herd manager for a few more years rather than becoming a sharemilker.

“A lot of this is about having the skills to deal with the banks. There is a need to educate sharemilkers about the information they need to provide the banks and how to develop a good working relationship with them.

“You give yourself a better chance of success in obtaining a loan if you have good budgets and information about what security you have. But if you have a good relationship with the bank you enhance the chances of getting a proposal across the line.

“They need to do their sums and know what their profitability levels will be in different scenarios such as an adverse event or a drop in payout,” he says.

Passey says Feds, DairyNZ and the Primary ITO are all involved in various initiatives to help educate sharemilkers.

He says while many people do the various Primary ITO courses, some of the information that sharemilkers need at an early stage comes in during the more advanced courses.

He says that business training is needed much earlier.

According to Passey, skill levels required in the industry vary from farm to farm. He says on smaller farms the emphasis will be on cows and grass, while on larger units, such as those in Canterbury, business management skills are more important.

Aaron Passey and his wife Jo are currently sharemilking on a 130ha property just north west of Dannevirke in the Tararua district. They peak milk about 300 cows and the farm is over 300 metres above sea level. It is situated in a valley and the Ruahine Ranges, snow covered in winter, form a stunning back-drop.

Passey grew up in Upper Hutt near Wellington, but always had a desire to be a farmer.

“While at school I frequently visited my relations in the Manawatu who had sheep and beef farms, so it was no surprise that when I left school I went to Massey University and completed a bachelor of applied science in agriculture. After a few months driving tractors, I began my career in the dairy industry,” he says.

He initially got a job as a herd manager then managed a small dairy farm in Taranaki before coming to the Tararua district where he’s been for the past thirteen years.

It was here that he was urged by a former Feds sharemilker president, Neil Filer, to become involved in the federation and over the years he has worked his way up the ranks.

He says his new role will involve lobbying and advocating to ensure that sharemilking remains a sustainable and profitable business.

“I also want to promote and create an environment that encourages more people to take up sharemilking and enter the industry,” he says.

While Passey admits that it can be challenging moving from sharemilking to farm ownership, he wants to uncover new and creative ways of making this possible.