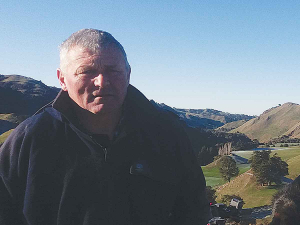 Central Hawkes Bay sheep and beef farmer Craig Preston has spent a huge sum on buying feed for his stock rather than sending them off to the works.

Preston has been on his 1,000 ha property where he runs 8,500 stock units of sheep and beef, near the township of Ongaonga, for more than 30 years. He says the drought in the region is the worst in living memory.

Since October 16 last year until mid-May this year, Preston says only 280mm of rain has fallen on his farm. He says 120mm is the average monthly rainfall, which means that the rain deficit for the last seven months is 550 mm.

He says it’s so bad that even young rimu and kahikatea trees are dying in the bush and on farms. He says many small creeks have dried up and, as a result, so have farm dams. Many farmers have had to move stock to properties where water is still available.

Preston told Rural News that when it comes to dealing with a drought, a farmer has two choices – kill stock or feed them.

“I have chosen the latter. I have paid the money and for me the stress has gone out of the situation,” he says.

“I started early and you could say I was lucky, but I thought something was going wrong,” he told Rural News. “We had a big easterly in December and in four or five days we only got 20mm, and it just stunk of drought. On that basis I bought a huge amount of feed – about $100,000 worth – and my idea was, if I look stupid, okay, I can say it was insurance.

“But all that feed has gone and we are getting the stuff up from the South Island at $150 a unit load for thrashed hay. It’s just incredible what’s happened.”

Preston says the people who have got caught and who are stressed are those who he describes as “holding and hoping”.

He says in the case of Hawkes Bay, the hope disappeared two months ago.

“I have friends who were holding and hoping, and I gave them some tough talking and said, ‘either kill or feed your stock’. In the end, they came round to feeding and all of sudden they felt better.”

Preston admits, for the next two years his task will be to repair his balance sheet from the cost of feeding his stock through the drought. He says if he killed capital stock, next year he would have to restock and that will be a problem because there will be a shortage of stock.

He says in normal years if there is a drought of some sort in Hawkes Bay, this is largely taken care of because the western side of the North Island gets rain and it’s relatively easy to buy feed and restock again.

“But that’s not the case this time,” he told Rural News. “I have a friend who trades bulls and he says it will take him two years to recover from this event.”

Preston says, for him, by the far the best option was to ‘hunker down’ and take the financial hit this season and be over the situation the following year without any unnecessary stress.

He believes, as a result of the drought around the country, there are signs of problems looming in the future. Preston believes that few hoggets will be mated this season and that upwards of three million fewer lambs could be dropped in spring. He says this season his own scanning rate is about 128%, whereas it is normally around 165%.

The one piece of good news, he claims, is that because of the stock shortage, the schedule is more likely to favour farmers.