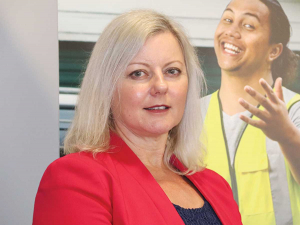 WorkSafe NZ’s Jo Pugh is calling on farmers to treat health and safety as more than a compliance issue in the wake of five on farm deaths this month.

Jo Pugh, who is the head of the general inspectorate of WorkSafe, says if there is to be a reduction in the number of farm-related deaths, there needs to be a change in the mind-set of those on rural properties. She says it has to be more that complying with the law in a bid to get WorkSafe off their backs.

So far this January, five people have died in accidents on rural properties, compared with last January when there were no fatalities. Pugh says there is no obvious reason for the sudden spike in the on farm death toll.

“I guess if the weather is really great they are out there a lot,” she told Rural News.

One year when we only lost eight people, which is quite remarkable for one year, we got quite excited about that and thought maybe we are going to see some change. But I got warned and told the weather had been terrible so not as many people were out there doing certain outdoor tasks.

“I think there is a seasonal element. When the weather is better you are out there and there is more to do – so people are more likely to be fatigued and make decisions that may affect their lives,” she says.

Despite this sudden spike in the deaths in January, Pugh believes there has been a change in attitude. She notes that Federated Farmers and other rural organisations are now very supportive of WorkSafe’s initiatives.

“We are moving from a period of time where – only a few years ago – our inspectors were being told by farmers: ‘leave us alone we don’t want you here we are right on our own’,” she added. “Then people started to realise that they had to do something to keep WorkSafe off their back and they were saying: ‘tell me what to do and I will bring a consultant in and do the paper work and we will be up and running’”.

She believes farmers are now moving into the space where they are actually staring to take notice and realise that a farm is actually a business and health and safety is good for business.

According to Pugh, farmers are taking the lead now and are talking to their employees and thinking about how they can stop their staff form being hurt. She says they are realising it’s up to them take action and control what happens on their farm and not rely on WorkSafe to come and hold their hand every time a decision needs to be made on farm.

She also points out that while only the farm fatalities make the news, the number of injury related accidents on farms is ‘massive’.

She won't be right

Pugh is under no illusions that changing the ‘she’ll be right’ attitude of some farmers will take time. She believes it may take a generation before people comply with the intent, not just the letter of the law.

To that end, WorkSafe is specifically engaging with young farmers in the hope that they will get the massage and apply it when they are farm managers or owners.

“Choose the right vehicle for the job, make sure it is well maintained and use it within its parameters paying special attention to the terrain on which it is being used,” Pugh says. “Use crush protection devices on quads. There are a couple that are approved ones and there is a subsidy available for fitting these.

“Always wear a helmet on any machine where there is a manufacturers recommendation to do so and wear seat belts on any piece of farm machinery that has a seatbelt fitted.  The seatbelt keeps you contained in the vehicle so if you have an accident you won’t be thrown out and crushed.”

Pugh also has a special message for parents and others responsible for young people on farms.

“Never ever put a child in charge of a vehicle – because they are not old enough, big enough or wise enough to operate adult vehicles.”

Health and safety is an important part of any business – it’s the right thing to do by your workers, and you also have obligations under the Health and Safety at Work Act 2015 (HSWA).

Getting employers on board for a "really robust health and safety journey", has seen Constellation Brands transform its injury outcomes over the past four years.