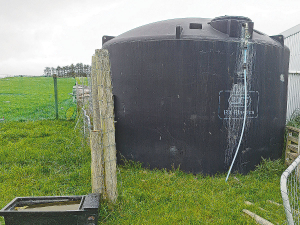 Worries still linger despite a recent report by the Rural Supplies Technical Working Group (RSTWG), which made 30 recommendations - including that the country's 100 or so council-owned rural water supply schemes be transferred into the four new mega water entities. RSTWG also suggested that the tens of thousands of privately-owned rural water supply schemes around NZ not be included in Three Waters reforms.

However, West Otago farmer and member on the Glenkenich rural water scheme, Hugh Gardyne, told Rural News that it "still looks like a loaded gun".

"When the Territorial Local Authorities (TLAs) hand over their urban Three Waters schemes - infrastructure control, staff capacity and capability as well as financial resources - to the Water Services Entities (the four mega entitities) then they are unable to support Rural Water Schemes going forward," he explains.

Gardyne's concerns echo those of Waimate District Council chief executive Stuart Duncan who believes the RSTWG scope was limited due to the Government's overarching reform objectives.

"The working group's terms of reference was limited, for example, recommending that all council-owned rural schemes transfer to the entities," he told Rural News. "With full knowledge that councils could not continue to operate the remote schemes if the urban schemes were removed, taking with it the bulk of the service equipment, assets and human resources."

Gardyne says some rural water schemes are unsubsidised (by local councils) but will still get treated alike.

"TLAs will have Rural Water Schemes (RWS) disposed from them but retain a charade of a structure as a conduit with Water Services Entities (WSE)," he adds. "It is my opinion and conclusion that all the RWSs subject to the new WSE structure, should be treated individually."

Gardyne says RWSs should be allowed, on a case-by-case basis, a referendum to determine if users want to be transferred to a WSE.

Meanwhile, Duncan believe a more sensible approach would have been for the Government to draft subordinate legislation that firstly classified rural schemes and made provision (guidelines) for certain classes of scheme to be exempt from certain aspects of the New Zealand Drinking Water Standards.

"What is propose in this overall Three Waters Reform agenda carries very significant risk, both in terms of public health, cost to customers and future operating success."

OPINION: The Hound reckons the Government's unpopular and controversial Three Waters reforms is creating plenty of jobs - for bureaucrats and contractors - but not for the local communities who are having their water assets stolen 'co-governed' and controlled by four new mega water entities.

The Rural Supplies Technical Working Group (RSTWG) has made 30 recommendations in a recent report to Department of Internal Affairs (DIA), including that the country's 100 or so council-owned rural water supply schemes be transferred to the four new co-governed water entities.

OPINION: Given what's happening around the world, New Zealand dairy farmers are on to a pretty good thing with its internationally…
back to top