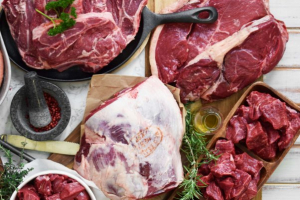 Red meat export receipts reached a record high for the December quarter of the 2017-18 season.

New Zealand beef and veal exports generated $588 million in the first quarter of the 2017-18 season, up 29% compared with the same period last season and the second highest on record for the December quarter – only behind the 2015-16 season.

Analysis by Beef + Lamb New Zealand's (B+LNZ) Economic Service shows the record was driven by high export volumes and average Free-on-Board (FOB) per tonne at record values for lamb and mutton, and near record values for beef, while the New Zealand dollar has remained relatively strong.

Andrew Burtt, B+LNZ chief economist, said lamb and mutton farm-gate prices were up 30% and 59% respectively for the first quarter of the season (October-December 2017) compared to the previous season. Cattle prices were relatively steady – up 5%.

“Average value per tonne for exports started at a high level after strong growth during the 2016-17 season and have remained strong despite higher processing volumes so far in 2017-18.

“Dry conditions led to an increase in New Zealand sheepmeat, cow and bull production over the first quarter compared with the same quarter in 2016-17, but similar to production in 2015-16.

“The 2016-17 season started slowly due to generally wetter and cooler weather and livestock were harder to finish, but good pasture availability reduced pressure on farmers to sell.”