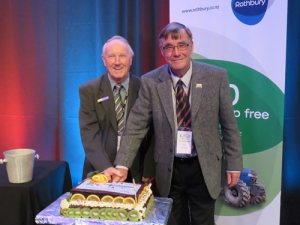 A record turnout of 153 contractors, from all around the country, descended on the Bay of Islands for this year's RCNZ annual conference.

RCNZ national president Steve Levet was delighted with the record conference turnout – held at the Copthorne Hotel and Resort, in Paihia, from June 27-30 – given the current economic climate.

"This is the largest turnout that I can recall and it seems many rural contractors have decided to ignore some of the doom and gloom merchants and are clearly focused on looking forward to better times."

Levet says the conference had an exciting agenda of relevant and pertinent issues to the rural contracting sector – along with a number of top-line speakers. This year's conference theme was: "Your Business from Start to Finish" and it also celebrated the 20 year anniversary of Rural Contractors NZ (RCNZ) as an organisation.

"We had an agenda chock-full of presentations focusing on how to get smarter in running your business and the use of the latest technology," he added.

Presentations, over the three days, covered a myriad of topics including: fuel management; insurance; taxation; ACC; machinery valuation; employment law; succession planning; looking after your workers and yourself.

At the Wednesday night dinner conference-goers were given an informative address by Primary Industries Minister Nathan Guy – who covered off the outlook for the primary sector biosecurity, Brexit and rural mental health.

"Wednesday night also saw our annual charity auction for St Johns raise more than $21,000 for the ambulance service in the Bay of Islands," Levet added.

Each year, as part of RCNZ's annual conference a charity auction is held each year with the proceeds going to St John in the local area. Sponsors provide gifts for the auction and RCNZ members then bid for these with all the money raised donated to St John in the region where the conference is held.

Levet says rural contractors have a great affinity for the work of St John around the country and RCNZ is proud to help support such a worthy and valuable charity that plays a vital role in rural New Zealand.

The conference finished up on the Thursday night with the annual RCNZ awards dinner and dance – sponsored by Rothbury Insurance.

No luck for Irish contractors

Ireland, often a source of skilled farm machinery operators for rural contractors in New Zealand, is facing even worse driver shortages than NZ.

Despite wet weather in many regions, the outlook is encouraging and we are seeing plenty of good growth around the country as rural contractors start cranking up for their busy season.

Showing the boys how it’s done!

Finding a solution to a very real problem

Recent debate about unemployed New Zealanders and their keenness – or lack of it – to gain work was sparked after Prime Minister John Key commented how hard it is to get beneficiaries into seasonal work.