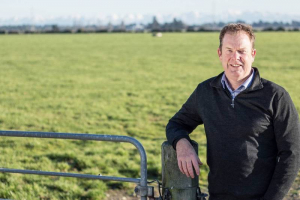 The accolade, presented at the awards function in Wellington last night, honours an outstanding chief executive working in New Zealand’s primary industries. It recognises leadership that has delivered positive change to the primary sector and promoted their organisational and reputational excellence.

Campbell says said the award is a personal honour but also much-deserved recognition of the commitment from Ravensdown’s shareholder owners and New Zealand farmers to smarter farming.

“In the six years, I’ve been at Ravensdown there has been an impressive shift toward sustainable practices, not only within our cooperative but throughout our valuable and important primary sector.

“Farmers’ are developing and adopting new and innovative technologies to tackle some of the toughest environmental issues we’re facing as a country and a planet. The leadership and excellence we see in our primary sector every day often goes overlooked, so it’s tremendous to see more attention being given to the exciting innovations being made right here in New Zealand.”

Campbell is passionate about collaboration and determined to shift perceptions of Ravensdown so that the co-operative is seen as farm nutrient and environmental experts rather than simply a fertiliser seller.

“Leadership is about listening, fronting up to challenges and welcoming scrutiny. As a sector earning $45 billion a year for New Zealand facing issues like environmental footprint, health and safety, new technology and trade disruption; the stakes are high. Of course we all can and should do better. For now I salute the real achievements being made across the primary sector and thank the judges for their kind comments.”

Award judges commented on Greg’s ability to demonstrate the important skills of partnership and relationship building as well as leading the transformation principal to the success of Ravensdown.