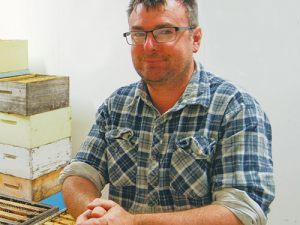 Waiau Apiaries’ Nick Belton with honey frames being held in a warming room before going to the centrifugal extractors.

The beekeeping industry expects to be disrupted for months because of the Kaikoura earthquake last November 14.

Apiarists depend on far-flung hives on farms and high country. But with public roads and farm tracks out of action in the region, access is a problem for many.

Wildrose Apiaries, Kaikoura, owned by Daniel and Alison Milne, is particularly hard-hit because their home and headquarters are on the plains near the town, but their main sheds with all their equipment and honey-extraction plant are at Kekerengu, on the northern side of the major slip blocking SH1.

Daniel Milne told news media on the day of the quake that they counted themselves lucky the house and water supplies were intact.

But Alison says that was before they realised the extent of their predicament.

“The drive that once took 40 minutes is now pretty-much 12 hours from the time you leave home to the time you arrive there. It’s had a bigger impact than we first realised.”

To make matters worse, the extraction shed has now been red- stickered so they will have to contract out their honey extraction for the foreseeable future.

With about a third of their hives located south of the slip and the rest north, running the business is now a “significant challenge,” she says.

They’ve had to rent a house at Clarence for the summer, where Daniel and some staff are staying for days at a time to service the northern hives.

Honey boxes that have to be brought back to Kaikoura must go by Blenheim and Springs Junction through the Lewis Pass, then join the controlled convoys travelling the Inland Road out to the coast.

Alison says they spent the first week or two after the quake righting hives that had toppled over, often helping other beekeepers unable to get to their own hives.

At some sites all the hives had toppled, but at others only one or two.

“If the hives split apart when they’re tipped, the bees will start to rob each other and then they get wound-up and aggressive. And it causes disease problems, etc, so it’s important to get them upright as soon as possible,” she says.

Another problem is a shortage of nectar because of a cool spring and summer, which means the Milnes have been supplement feeding, and some hives have suffered through their not being able to reach them in a timely fashion.

Meanwhile, Waiau Apiaries’ Nick Belton, whose catchment area extends up the Inland Road into Kaikoura and beyond, says he spent five or six hours on the day of the quake righting his toppled hives by helicopter, costing about $1700 an hour.

“There wasn’t any alternative at the time. We had rain coming too, so they had to be standing upright.”

Belton says the quake cost him about a week and a half of direct production, and he had taken on extra labour. Hives need regular servicing but some he still has not returned to, apart from ensuring they are upright.

Belton and Alison Milne praise Midlands Apiaries, Ashburton, for sending in beekeepers to help the region’s apiarists with specialist tasks.

However, Belton is critical of the continued restrictions on access, particularly along the Inland Road where most of hives are placed. With access still confined to controlled convoys it is hard having to work to someone else’s timetable, he says.

“The local Civil Defence on the ground were pretty understanding but they just had no leeway.”

A Bay of Plenty teen has been given a boost into his dream career in beekeeping after receiving the 2020 Apiculture New Zealand Ron Mossup Youth Scholarship.

Apiculture NZ is seeking assurances from authorities that the country’s beekeepers won’t be faced with the same problems that their Auckland colleagues did when that region went into lockdown.