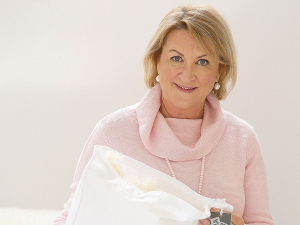 During manufacturing to produce the filling for the pillows a crimp is placed in the wool, which gives it permanent bounce.

Wright's love and passion for wool is in her DNA. Her father was a wool buyer in the South Island. Therefore, it wasn't surprising when she followed in his footsteps and set up her own wool-broking business in Waipukurau in central Hawke's Bay.

As well as running her wool broking business, Wright has a joint venture company in the USA called the Natural Wool Company. It uses NZ wool to create high-value, environmentally-sustainable wool products for the US market. This includes pillows filled with specially-processed wool called knops or pearls.

Wright says the pillows were only sold in the USA and are not availabe in NZ because it is to expensive to import them here. However, last year, an amazing set of circumstances unfolded, which has seen the pillows now become available locally.

"My daughter, who lives in Queenstown and has a holiday home business there, asked me if I could get some of these US-made pillows for. She is trying to create an environment in her homes by using sustainable NZ products," Wright told Rural News.

"It was too expensive to get them sent over to NZ. But I knew someone in Christchurch who actually produces these knops and he supplied her with some to make just a few pillows."

Wright's daughter, Rebecca, came back extolling the qualities of the wool-filled pillows. Then, a few days later while giving her regular update on wool on the local radio station, Wright mentioned that she was starting to manufacture the wool pillows in NZ and half-jokingly said that if people rang her company that day they could buy pillows for a special price.

"I thought that I would hardly get any reaction. However, when I got back to the store the staff said: 'What on earth did you say on the radio?'," she explains. "The phone had not stopped ringing. So, we had to scurry around very quickly and organise the wool and pillow covers. Then we thought maybe there is a business here (in NZ) - so that's how it started."

Wright believes the secret to the success of the pillows is the manufacturing process of the wool. She has formed a partnership with Joma Wools to produce the filling for the pillows. Its process puts a crimp in the wool, which gives it permanent bounce.

Wright says NZ wools, unlike says those in the UK, don’t have a very high bulk but the Joma process creates this by crimping the wool.

“What I find amazing with wools processed in this way is that you can sit on them (the pillows) all day and they will quickly bounce back,” she says.

For The High End

Philippa Wright says the wool pillows are a premium product because they are expensive to produce and range in price from $100 to $150.

However, the price has been no barrier to demand for the product. With very little promotion, since her company started manufacturing the pillows late last year, sales are well over the one thousand mark. Demand has been from throughout the country, but especially from Auckland.

“I am genuinely astonished at the demand and the stunning feedback we are receiving,” she told Rural News.

Currently, Wright’s existing staff at her wool store in Waipukurau are manufacturing the pillows by hand – essentially stuffing the wool into the pillow cases. But in time, as the marketing efforts ramp up and demand increases, she concedes that additional machinery may be needed.

Wright says before Christmas they were flat out producing pillows, but demand quietened down in January – which just happened to be the busy time for the main wool operation.

“The staff genuinely love producing the pillows because they see it as a real positive activity and something we can show our growers that we are doing our bit and trying to find a way to increase the value of their wool,” she adds.

“I am not saying that Wright Wool pillows are going to change the market, but it is another form of educating the consumer about the benefits and value of wool.”

Wright says the venture with pillows is all part of that ongoing promotion to gain greater recognition for wool.

“We have really got to reach for the stars and put wool where it should be as a high end fibre that is going to last and meets the highest environmental standards.”