Pigs are really flying in Canterbury 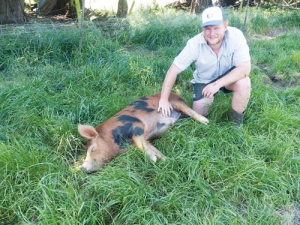 Friendly rivalry between groups of young farmers – with as much eye on witty animal names and snappy dressing as the quality of the livestock – has transformed the pig section of the Canterbury A&P Show.

A group of mates from the Glenmark rugby club, North Canterbury, has set the pace, calling themselves the Bhuja Boar Breeders Association and turning out in bespoke matching blazers and maroon ties.

Now “out to beat the Bhuja boys” is the Selwyn Swine Syndicate, first-time entrants who have hit the ground running with three boars and two sows entered.

Syndicate member James Davidson, a Darfield contract milker, says both groups have Facebook pages and “a good bit of banter” flies between them.

“We’re first time entries, but they’ve been in it the past couple of years so we’re trying to see if we can stick it to them. It’s a good bit of friendly competition,” he told Rural News.

“I guess our local watering hole would be the Darfield pub. That’s where a lot of the talk has originated and plenty of our meetings. It’s all a good bit of fun -- but serious fun.”

Davidson is joined in his syndicate by Tim McMae and Scott Carnochan. Together they have entered three boars, Pablo Escoboar, Frank Lucus, and Notorious P.I.G. and two sows – Amy Swinehouse and Beth Heke.

Pig entries for the show are up to 44 – numbers not seen in a decade. There were no pig entries in 2010 and only one or two each year through to 2014.

Davidson believes the new good-natured rivalry of the young syndicates may have tempted traditional breeders back into the ring.

The upsurge has prompted the introduction of a new commercial class looking for “the perfect eating pig” regardless of breed.

Davidson proudly shows off his own animal, Pablo Escoboar, a ginger-spotted cross between a Berkshire mother and a Tamworth father, and as friendly as a house cat – rolling over for a tummy rub.

“I like the Tamworth because it’s a bit slower growing and it is better eating and you get the stockiness from the Berkshire -- from his mother,” he explains. “But his mother was as mad as hell. I don’t actually have her anymore, for good reason.

“But I thought I’ll keep him and put him in the show.”

However, Davidson concedes Pablo lacks a bit of length and the big hams the judges will be looking for in the commercial class.

“I’m not too confident about him to be honest. He’s a bloody good character more than anything; friendly and will trot around anywhere. But they’re looking for ham. So he’s probably not our best hope.”

Davidson has never before entered the show, but has raised pigs as a hobby and to provide meat.

With three boars now in the syndicate he is unsure of Pablo’s future.

“I’m pretty keen to hang onto him. He’s a pretty nice-natured boar. He just doesn’t quite have the length and the big arse that some of the other ones do,” he says.

“He’s got a bit of character to him. And I don’t think there’ll be too many ginger-spotted pigs at the show.”

Dairy farmer Peter Gilbert is the new president of the Canterbury A&P Association for 2017. He was elected at the annual meeting, replacing Warrick James.