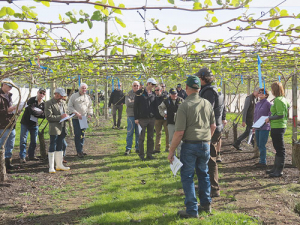 Kiwifruit Vine Health has trumpeted its collaborative approach with Government and industry as a winning formula.

The partnership approach has ensured the industry was better placed for any future biosecurity event, he says.

“There is no doubt that by working in partnership we can achieve better biosecurity outcomes,” Hutchings says.

“KVH was the first organisation in NZ to sign up to a new collaborative arrangement called Government Industry Agreements -- an arrangement which enabled the Government and industry to share decisionmaking, responsibilities and costs for incursions.

“We have also embraced a collaborative approach in partnering in the Port of Tauranga Biosecurity Excellence initiative for many years and are founding members of the exciting new Tauranga Moana Biosecurity Capital programme.”

Hutchings says recovery from Psa was an achievement of which the entire kiwifruit industry could be proud. KVH and NZ growers were passionate supporters of the national strategy of creating a biosecurity team of 4.7 million people.

“We’ve worked hard in the biosecurity space to ensure a resilient and united voice for the kiwifruit industry, and it’s great that our efforts -- and those of the people who have worked with us over the years -- have been recognised with this award.”

The Ministry for Primary Industries says the award recognised KVH’s contribution to the recovery of the kiwifruit industry following the devastating discovery of Psa in 2010, and its subsequent responsibility for managing all biosecurity readiness, response and operations for the industry.

“KVH was formed in 2010 as the NZ kiwifruit industry reeled from the discovery of Psa,” Tanner said.

“The small team was tasked with working alongside industry and the Government to help growers contain and manage Psa.

“KVH did a great job and was subsequently tasked with responsibility for addressing all possible pests and incursions.

“The KVH team is hugely dedicated to its role in helping protect the livelihoods of NZ kiwifruit growers through monitoring, education, technology, and partnerships with government and biosecurity agencies.”