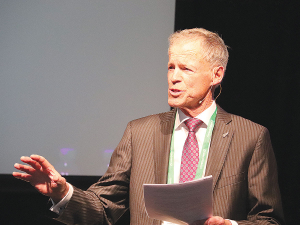 He told Rural News that EU regulations are top-down heavy, expensive and don't work. He says the present government is following a similar philosophy to the EU with its regulatory approach.

"That is one of the reasons why the UK left the EU. They wanted to get into world's best practice for regulations and NZ, Australia and America were seen to be leading the way in this, with the focus on outcomes and a light-handed approach that produces good outcomes that are basically risk-managed."

Smith says at the recent Red Meat Sector Conference there were claims that farmers did not understand the environmental issues and there was criticism of the Groundswell protests.

He says the reality is that most farmers want to improve the quality of freshwater, improve biodiversity and make progress on carbon emissions.

"The problem is the way the Government is going about it. Theirs is an intractable, unworkable, heavy-handed, top-down way," he says.

"The freshwater regulations are a disaster because NZ catchments and soil types and its environment changes so much across the country and one set of regulations will never work. They are just killing off some of the excellent fresh water work going on around our regions."

Smith also rejected claims by a speaker at the conference who claimed that NZ agriculture was not innovating enough. He says the agriculture sector has made huge gains over the years through quality, science-based research and is continuing to do this.

"The only period when NZ agriculture didn't innovate was the period from 1973 through to 1984 when we had the big subsidies. Subsidies kill innovation but agriculture has been hugely innovative since then," he says.

Finally, Smith - who before entering Parliament spent 13 years in universities, including lecturing at Massey University and as Commonwealth Scholar at the Waite Research Institute in Adelaide - says he's concerned that NZ's universities are becoming a little "side tracked".

He says NZ needs to be doing work on things like regenerative agriculture, but making sure that if we go down that track, it is backed by sound science.

"If it is just a marketing thing, one day the bubble will burst," Smith told Rural News. "If you have not based your productive system on sound science it will collapse and NZ cannot afford that."

He says we have to ensure, as we have up until now, that sound science underpins our productive systems.

Trade experts are warning that time is running out to secure the future of New Zealand red meat exports to the European Union.