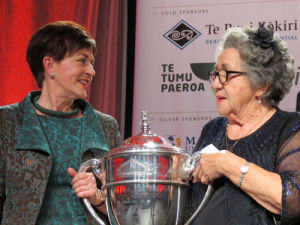 Governor General, Dame Patsy Reddy, announced the winner at a special awards function in Christchurch last Friday. The function was attended by more 650 people including the Minister for Māori Development, Nanaia Mahuta, the Minister of Agriculture Damien O’Connor and other dignitaries representing te ao Māori, central and local government and agribusiness.

The Ahuwhenua Trophy was inaugurated 85 years ago by Māori Leader, Sir Apirana Ngata and the Governor General at the time, Lord Bledisloe with the objective of encouraging Māori farmers to improve their land and their overall farming position with an emphasis on sustainability.

The winning farm is their Boundary Road property, one of a number of farms owned and operated by the Trust. Boundary Road consists of a 72ha block near Lake Rotomahana, about 30km south of Rotorua. The Trust milks 220 cows which produce about 90,000 kgMS on farm.

The other finalist in the 2018 competition was the Proprioters of Mawhera Incorporation whose dairy farm is near Hokitika on the West Coast of the South Island.

Kingi Smiler, the chairman of the Ahuwhenua Trophy Management Committee says both finalists set very high standards in terms of their farming and the governance of their operations. But he says there has to be a winner and the judges believed that on this occasion Onuku were the top performer.

“I congratulate Onuku and commend them for their great farming operation and their commitment to the values of Sir Apirana Ngata and Lord Bledisloe. Every year we attract an amazing cohort of farmers which showcase the success of Māori achievement in the agri business sector – long may this continue,” he says.

Smiler says it is great to showcase Māori excellence before such a large and influential audience at the awards function.