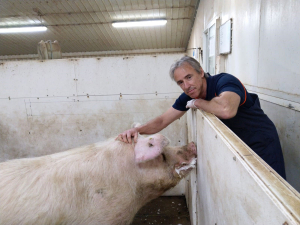 NZPork has announced the winners of its Outstanding Achievement Award and Stockperson of the Year Award.

New Zealand pig veterinarian Bruce Welch has been recognised for his services to the industry.

Welch has been presented with NZPork’s Outstanding Achievement Award for his 21 years of work in the sector.

NZPork chief executive David Baines says Welch, who is based in North Canterbury, is dedicated to the welfare of pigs and to the good of farmers.

“Bruce’s knowledge of pigs and pig care is unparalleled and his input and influence is evident in every aspect of pig farming in New Zealand.

“That extends across productivity, animal health, welfare, antibiotic use, biosecurity, nutrition, genetics and the industry’s PigCare programme. He is also closely involved with the current review of the welfare code.”

Meanwhile, Courtney Gloistein of Kilgour’s Farm in North Canterbury has been named 2021 Stockperson of the Year.

The winner of the Stockperson of the Year award, which carries a $500 prize, is selected from trainees who have completed their National Certificate in Pork Production Level 3, the qualification for people involved in the care of pigs in a pork production unit. Entrants for the award must be recommended by both their farmer trainer and off-job training provider.

“We congratulate Courtney and hope she continues to have a successful career in the industry,” says Baines. “It is great to see talented young stockpeople like Courtney gaining these important qualifications.

“The pork sector offers many opportunities for people seeking to work with livestock, at entry level or those seeking a career change, with a combination of on-job and off-job training and strong career paths.”

Where is your Christmas pork from?

As Kiwis order their Christmas ham, NZPork is encouraging them to check the pork is actually from New Zealand.