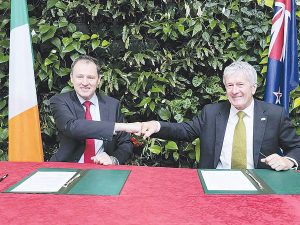 Agriculture Minister Damien O'Connor and his Irish counterpart Charlie McConalogue after signing an agreement on greater co-operation in agricultural research between NZ and Ireland last month.

This follows the signing of an agreement between the two countries in Dublin last month. It came as the result of a meeting between Agricultural and Trade and Export Minister Damien O'Connor and his Irish counterpart, Charlie McConalogue. The pair met last month to discuss options for greater cooperation and later O'Connor visited the Ashdown Food Research Centre in Dublin.

O'Connor says the aim of the deal is to build on the research partnerships that already exist between the two countries. Massey University and DairyNZ are two organisations which have worked with the Irish research entity Teagasc for many years. He says NZ works closely with Ireland in the Global Research Alliance.

"The agreement will have a particular focus on pasture based farming systems. We both have the same challenges around environmental impacts and obligations to greenhouse gas reduction as they do and our farming systems are vey similar," O'Connor told Rural News.

"Irish farmers face similar challenges to ours. The day I was in Dublin, there were farmers in other parts of Ireland protesting about similar issue that have been raised in NZ."

O'Connor says both sides can learn from each other and he's keen to see more scholarships provided to encourage more young people to travel to see what is happening in terms of research in both countries.

"In some respects, it's giving greater political support to what is happening already and developing this further," he adds.

"In other words, creating a more formal partnership which builds on the close historical ties between out two nations."