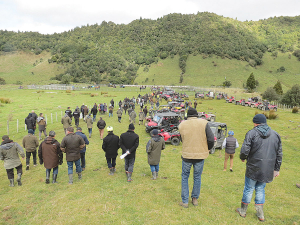 That’s the view of Taine Randell, former All Black captain, who is involved with Ngati Kahungunu. Recently, Randell attended the field days of the finalists in this year’s Ahuwhenua Trophy, which this year is awarded to the top Māori sheep and beef farm.

He told Rural News that he was very impressed with this year’s finalists and says that to describe them as good Māori farms doesn’t do them justice.

“They are top performing farms in New Zealand and top farms globally,” he says.

Randell pointed to fact that Whangara Farms, a finalist, was an aggregation of three farms which was fantastic. He also praised another of the finalists, Gwavas Station, which was bought several years ago by the Te Awahohonu Forest Trust with a view to finishing lambs bred on its other farm Tarawera Station. “This is all about moving up the value chain.”

Randell says the vision and excellence shown by all finalists shows just how good Māori farming is today.

McIvor was at two of the field days and says ordinary farming leaders can learn from Maoridom. He points to governance as one area in particular. “For me, the Ahuwhenua Trophy is a great way to recognise excellence. What this competition does so well is really dig deep down into businesses to identify what are the strong and weak points, what are the things that drive successful businesses,” he told Rural News.

“By their nature, Māori are very proud and competitive, and this competition brings out the best of those competitive juices.”

McIvor says Māori have a certain entrepreneurial spirit in them and he believes a lot of farmers could learn from that. He says while Māori take risks, they are calculated risks, and this is helped by the fact that they build around them a very strong team of advisors. These may be in farm management, financial or environmental areas.

“One of the things I have observed about Māori businesses is the emphasis on paying off debt. Many of their entities have often had hard beginnings and in some cases they inherited debt and have had to borrow, but they have real focus on paying off debt.

“That’s something unique to Māori. There are pakeha farmers who work hard at paying off debt, but there are others who basically just pay interest.”

According to McIvor, one of the great things about the Ahuwhenua competition is that it celebrates success in excellence and that those in the competition share their knowledge, especially at the field days.