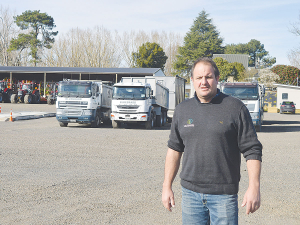 Bluegrass Contracting's Brook Nettleton has described the Government's efforts to facilitate the arrival of overseas workers as a joke.

A leading rural contractor has described the Government's efforts to facilitate the arrival of oversees workers as a joke.

Bluegrass Contracting managing director Brook Nettleton says in December last year they were told by the Government that they could get 200 overseas machinery operators in.

"To be honest we're still no further ahead," he told Rural News. "We had some drivers lined up, but the Government has taken so long to secure MIQ spots that most of them have got sick of waiting."

Nettleton says now the Government is talking about scrapping MIQ requirements for overseas arrivals within the next two months. But he says the planting season will be half finished by then.

“The drivers don’t want to come all this way for four weeks work,” Nettleton explains.

“My office staff have spent hours getting paper work prepared for each driver, for them to say, ‘It’s too late and not worth coming now’.

“The ag sector is in the same position as it was back in September 2021.

“Why is it that we [let] DJs in at the drop of the hat but people wanting to come to NZ to work and put money in the community are being held back?” he asks.

“These overseas machinery operators and the rural sector have kept this country going through Covid.”

“It’s layer after layer and it brings tears of frustration for our members, who are already working impossibly long hours and as yet have not even been able to lodge Expressions of Interest for staff positions, which ministers had approved to come in.”

Olsen wants the Ministers of Immigration and Agriculture and the Prime Minister’s office to meet the urgency of the situation.

“We received approval on December 12 and now, more than a month on, we’re looking at another two months before the first arrivals. It’s not good enough. The primary sector needs more support now, and frankly the current situation our members find themselves in doesn’t cut it.

Olsen says his organisation and Federated Farmers, supported by MPI, have done everything they could to help contractors meet a crushing labour shortage.

“We understand and respect that the resurgence of another Covid variant and border entry changes have put the squeeze on MIQ,” he explains. “That said, those risks would have been part of the assessment when we had ministerial approval just on a month ago to bring in the desperately needed 200 machinery operators.”

Olsen says rural contractors, whose work is essential to food production and our export economy, now find themselves towards the back of the MIQ queue.

OPINION: Media reports that only eight overseas teachers have arrived into the country seven months after 300 border exceptions were granted wouldn't surprise too many in the rural sector.

MIQ is a joke - contractor

A leading rural contractor has described the Government's efforts to facilitate the arrival of overseas workers as a joke.