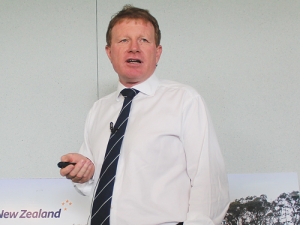 Fonterra chairman John Wilson says the co-op is providing a new level of transparency to shareholders about the business.

He told the annual meeting in Waitoa last week that it was providing clear reporting on each business – ingredients, consumer and food service and international farming.

Wilson says in any season some parts of the co-op may perform better than others, "just as some farmers are more productive than others on a year-to-year basis".

"We can see clearly where we are doing well and the steps we are taking where performance needs improvements," he says.

"We are enabling shareholders to better understand the business."

Wilson says reporting performance quarterly, as has happened this month, added further to this transparency.

TAF (trading among farmers) is now part of the business; ownership and control by shareholders is as strong as ever, as shown by the record voter turnout last week.

Wilson notes Fonterra has stood its ground in the face of competition.

"We produce 85% of the milk in New Zealand, we have a stable milk supply base and our shareholder numbers continue to increase."

During general discussion at the meeting Wilson admitted the co-op had "dropped the ball" in its communications with shareholders. Wilson said that informing farmers earlier this year about new PKE usage limits was one such example.

He says the co-op must get its communications better and this is in the front of mind of management.

Former King Country MP Shane Ardern told the meeting that the co-op was unable to take stakeholders along on its strategy "in these turbulent times".

"We definitely have communication issues," Ardern told the meeting. "We have to do better in our public relations department."