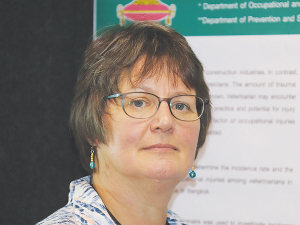 People newly diagnosed with leptospirosis or suspected with the disease will be asked to take part in a nationwide study.

The study is for cases which will get into the health system from now on. Those people will be asked to consent to being enrolled in the research, says Benschop, a veterinary epidemiologist researching the disease for 10 years.

They will mainly be referred by district health boards’ medical officers of health. But in Northland, Te Kuiti, Wairoa and Waipukurau the researchers will deal directly with GPs on suspected cases.

“People who have had leptospirosis previously – I am quite interested in them but for a later study,” she told Rural News. “This study is for new or what we call incident cases, from now and for the next 18 months.”

Benschop wants rural people to be aware of this because if they catch leptospirosis they may expect to get a request to be part of this study.

“I would very much like them to consider being involved. The study has full ethics approval, people’s privacy will be protected and the information we gather will inform intervention strategies.

“We will look at people who are ill with leptospirosis and compare them to controls -- people who have not had leptospirosis but are approximately matched for age and sex and are living rurally.”

Some rural people will get a letter and then a phone call to be asked if they will be a ‘control’ participant.

Benschop says emerging trends in leptospirosis have shown it to be primarily a disease in rural people, but there is an increase in cases that don’t have traditional farmer or meat worker exposure.

“Even within the groups that we know get leptospirosis, we know we have issues in the use of protective gear, vaccinations and new strains – so it is time for a hard look at what are the risk factors.

“That is the key objective of the study: what are the key factors for a person getting leptospirosis in New Zealand?”

Hence they want to study 150 new cases and 300 control participants.

She says the study is crucial because in NZ we are in a state of change with new strains emerging. Benschop believes it is likely there are more rodent and flooding pathways to leptospirosis.

“While we still have direct risk factors, ie close contact with livestock, new risk factors need to be investigated,” she says.

“We want to think about interventions because this is a really nasty disease. About two-thirds of people go to hospital, and about a quarter to a third of people have long term effects.”

She says one advantage of working with GPs in the regions is the likelihood of detecting leptospirosis cases early so as to culture the bacteria from samples taken before the person has started on antibiotics. These will be compared to the genetic ‘fingerprint’ of their animals, and to possums or vermin in the vicinity, and water and mud samples.

Nine months have passed since they got their funding from the Health Research Council, Benschop says, because it is a complex and ambitious study requiring a high level of cooperation with the medical profession.

“Researchers at Massey University believe these changes indicate a shift in the way the disease is being spread, animals that carry it, and changing variations of leptospirosis.

“RWNZ is pleased to hear that Massey University is researching these changes, including people more at risk. We encourage being part of the study by contacting the university.

“We have been involved in the leptospirosis work done by Massey since the 1970s -- fundraising for research and running awareness campaigns.

“Leptospirosis has devastating effects on people who catch it, their families and rural communities,” says Gower.