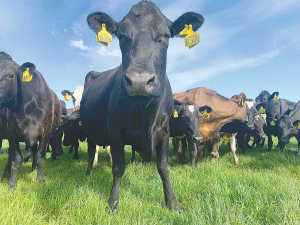 Digestibility, a measure of pasture quality and nutritional value, is one of the most important factors for increasing milk or meat production.

Germinal general manager Sarah Gard explains that digestibility, a measure of pasture quality and nutritional value, is one of the most important factors for increasing milk or meat production.

“A digestibility gain of 1% is worth 3% of yield,” she says. “AberGreen AR1 has 5.5% higher digestibility than standard ryegrass varieties, which means they can absorb more energy from the feed.”

“I firmly believe that there are three pillars to a good ryegrass – yield, quality and persistence. There is little benefit in growing a lot of low quality feed.”

The new ryegrass is the latest addition to Germinal’s range of high sugar grasses, which are bred to produce a higher level of water-soluble carbohydrates (WSC), or sugar energy, than traditional ryegrass.

In an independent trial of New Zealand cultivars, AberGreen AR1 was found to have a 15.5% higher than average WSC level.

“The high sugar content enables the microbes responsible for the breakdown of forage to operate more efficiently, so more protein is converted to meat and milk and less is excreted into the environment.”

Gard adds that the new grass is also very densely-tillered and provides superior ground cover compared with other ryegrasses.

“As a result, it has increased ability to withstand heavy grazing and pugging. The increased ground cover provides the plant with greater ability to capture light for photosynthesis and growth, restricting the invasion of weeds and unsown species.”

Gard adds that the improved use of ruminal protein can limit the amount of nitrogen lost in urine.

New Zealand dairy is unique when it comes to nutrition.

Will maize cover for grass?

The summer dry has resulted this autumn in less-than-ideal quantities of grass being available to cows.