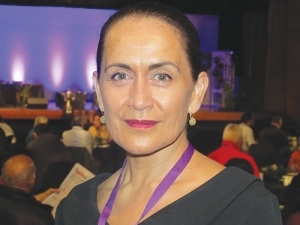 The Federation of Maori Authorities (FoMA) has come out in strong support of the new Trans Pacific Partnership (TPP) agreement.

FoMA is a Maori business advocacy group with 150 members, including most major tribal authorities, who collectively have assets of $8 billion, much of it in the primary sector.

Chair Traci Houpapa is a professional company director and business consultant and the chair of Landcorp Farming.

Houpapa says FoMA represents the majority of Maori exporters in New Zealand and the lobby has always had a relationship with successive governments over free trade agreements. She says it should be no surprise that FoMA supports the concept of TPP.

At their recent conference, FoMA members were briefed on the talks which led to the TPP agreement and Houpapa says they were comfortable with what they were told.

"What we see is that the removal of tariffs has to be good for exporters and that includes Maori exporters because we grow and sell. If we only sell to Maori we are completely limiting the opportunities for our shareholders and our owners and our beneficiaries," she told Rural News.

"If we only sell within our domestic NZ market, we are limiting our opportunity. NZ has always been part of the trade conversation globally and we led these talks in many ways and it's opportune for Maori exporters to participate in the next stage of the conversation."

Houpapa says it isn't generally known by the wider public that all the other nations in the TPP have had protectionist mechanisms designed to secure their trade and export arrangements to the detriment of NZ exporters with, of course, a knock-on effect for Maori exporters. The removal of the tariffs, as proposed by TPP, bodes well for us all, she says.

"That our negotiators fought hard to enshrine the Treaty of Waitangi and to maintain the commitment to tangata whenua and mana whenua under the treaty was certainly encouraging. That isn't widely accepted or known and again is something FoMA always had confidence in – that this and all NZ governments would uphold and honour the treaty."

Houpapa says Maori were the original traders and NZ's first exporters, trading wheat, flax and other goods to Australia.

"So it's not unusual for us to be exporters; it's not new, it's not part of the emerging Maori economy, it is simply who we are. We have always traded domestically and internationally and so the concept of trade arrangements or agreements is not foreign to us."

An asparagus breeder sees scope for the industry making a “tremendous breakthrough” via the Comprehensive and Progressive Agreement for Trans-Pacific Partnership (CPTPP).

The Trans-Pacific trade deal, CPTPP, has already cut tariffs on New Zealand beef to Japan from 38.5% to 26.6%.