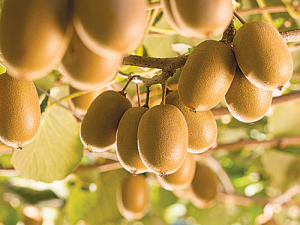 Zespri says the kiwifruit industry has remained relatively unscathed from the storms.

Avocado and kiwifruit industry representatives say recent storms have caused severe damage but it appears to be localised and unlikely to affect the overall national crop.

Avocado NZ chief executive Jen Scoular says losses would have been higher if this was the better year for avocados; this year is the off-year for the fruit which produces a good crop biennially and a small crop in the off year.

Damage from ex cyclones Debbie and Cook has been “quite sporadic”.

“We have had some [hard hit] orchards with both the wind and the rain, particularly in the Edgecumbe-Opotiki areas. The continued rain is tough on the trees as they hang the crop for next year,” Scoular told Rural News.

“In some orchards a number of trees were uprooted and the fruit is on the ground but it hasn’t been a solid impact across a whole area. But it has been very significant in a lot of places, particularly in the Eastern Bay.”

Now is the very end of the 2016-17 season, so the crop on the trees is for June-July harvesting this year -- fist-sized fruit.

“The crop is much lower this year anyway so the trees are not holding huge amounts of fruit as they would have been a year ago.”

But they cannot say how it may impact the overall crop, if at all.

“In Northland the industry got away without too much wind so it wasn’t as bad as people had anticipated it might be with crop coming in.”

An avocado may sometimes completely uproot but the tree stays sideways and keeps growing.

“They are a pretty shallow rooted tree and in the areas without good drainage... a tree can take 18 months to recover from the water sitting around the roots. That is when the impact can carry on to the next growing season.”

Scoular says they would be “quite happy with a quiet and not too wet winter, thank you!”

Kiwifruit industry representatives were in contact with growers to reduce the risk of kiwifruit vine death due to deposits of silt from river water and compaction of soil by heavy vehicles.

“Grower assistance has been focused on three core areas: identifying severely affected orchards and providing information and support where necessary; helping provide pumps for getting water off orchards; and communicating the availability of pastoral care for people experiencing stress,” she says.

A handful of kiwifruit growers near Te Teko and Edgecumbe had bad flooding on their orchards from ex-Cyclone Debbie.

“The few orchards whose fruit was touched by flood waters or dropped by wind will not be harvested due to food safety reasons,” she says.

“However, it is hoped most of the fruit on affected orchards will be able to be harvested.  It will be some time before the extent of long term damage to kiwifruit plants from flooding in this area is known.

“There was limited further damage from ex-Cyclone Cook.  Supporting affected kiwifruit growers has been a priority across the whole industry since the arrival of cyclone Debbie,” Johnson told Rural News.

“We’ve had no reports of serious damage or anyone being hurt and we don’t anticipate this will impact on the overall 2017 season.

“It’s been a gorgeous week or two in the Bay of Plenty and the weather forecast is looking good, with picking and packing now in full swing now.”