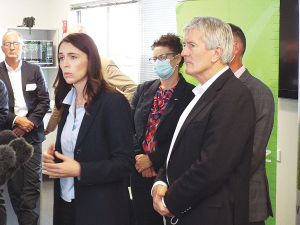 Not so fast: Another case of Mycoplasma bovis, on a dairy farm near Ashburton has been discovered despite a few weeks ago both the Prime Minister and the Minister of Agriculture proudly declaring that the disease had all but been eradicated.

This coes in the light of the discovery of another case of Mycoplasma bovis, on a dairy farm near Ashburton. Just weeks ago, both the Prime Minister and Minister of Agriculture proudly announced that the disease had all but been eradicated and was confined to a single farm.

However, Simon Andrew, director of MPI's M. bovis programme, says it's not uncommon to find additional cases when you get to the tail end of an eradication programme.

He says the investigation is still in its early stages.

"I think the key point for us at the moment is that, given the level of surveillance we are undertaking and the very low level of infection we are finding, this would indicate the disease isn't widespread," he told Rural News.

No details about the farm are being made public, with MPI saying its priority is to protect the privacy and welfare of the farmer and their family and to manage the disease. Andrew says they have to make sure the farm is well supported, because when an event like this happens, it has a profound impact on the farmer, their family and the wider community.

"We work with the farmer to understand the movement of cattle and ensure that there are good NAIT records," he explains.

"Another phase is working with the farmer and the epidemiology team to undertake the analysis of the infection on the farm. We then look at what movement restrictions of animals to apply on an infected farm, but at the same time endeavouring to minimise the impact of this on the overall farming operation, which is not always easy."

As well as the ongoing testing programmes on the infected farm, MPI will be checking neighbouring farms to make sure the disease hasn't spread. They'll be checking NAIT records, which are a very important part of the process to determine animal movements.

"In a situation like this, accurate NAIT records improve the chances of finding the disease quicker and this applies not only to M. bovis but to other biosecurity risks and responses. Farmers must remain vigilant and adept good on-farm biosecurity practices," Andrew says.

He adds that it's not just NAIT, but also making sure that farms have secure boundary fences so that animals on one farm cannot interact with animals on an adjacent property. Andrew says farmers on larger properties can create separate units within a farm to keep a mob of animals away from another mob.

"Broadly speaking, there is still room for improvement in NAIT compliance."

Push to prevent the next pest entering Taranaki

Taranaki Regional Council and the Ministry for Primary Industries (MPI) have joined forces to identify the pathways by which new pest plants could enter the region, whether by road, rail, coast or air.