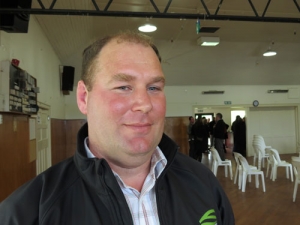 Fed Farmers’ Andrew Hoggard says most farmers will have to borrow money to get through a challenging season and a lower interest rate will help.

Dairy farmers are welcoming the latest cut in the official cash rate.

Federated Farmers Dairy president Andrew Hoggard says most farmers will borrow money to get through a challenging season and a lower interest rate will help.

“The less interest they will pay, the better,” he told Rural News.

Hoggard also expects the cut in the OCR by 25 basis points to 2.75% will push the dollar down, helping export earnings.

Reserve Bank Governor Graeme Wheeler has signalled further cuts. He says global economic growth remains moderate, but the outlook has been revised down due mainly to weaker activity in the developing economies.

“Concerns about softer growth, particularly in China and East Asia, have led to elevated volatility in financial markets and renewed falls in commodity prices,” he says.

The New Zealand economy is adjusting to the sharp decline in export prices, and the consequent fall in the exchange rate.

“A reduction in the OCR is warranted by the softening in the economy and the need to keep future average CPI inflation near the 2% target midpoint,” Wheeler says. “At this stage, some further easing in the OCR seems likely.  This will depend on the emerging flow of economic data.”

Hoggard says while farmers are happy with the low dollar and low interest rates, they are also watching the GlobalDairyTrade (GDT) auction, which has made two strong consecutive gains after a run of 10 price drops.

He believes unless there’s a miracle and GDT prices rise 10% for the next six consecutive auctions, this season’s payout will remain low.

“Most of GDT sales are forward contracts so a lot of products have been sold at low prices; we are happy with the two consecutive price rises but they have to be maintained.”

Rabobank agribusiness research analyst Emma Higgins says while it’s been great to see prices on the GDT bounce upwards over the past two events, global dairy market fundamentals are still out of balance.

“We are still awaiting the global supply taps to be turned off, particularly in Europe as farmers continue to expand production after having their shackles removed following the unwinding of the EU quotas.

“From a demand perspective, China is still whittling away excess inventory, while other importers outside China and Russia who have previously mopped up the oversupply appear to be stuffed to the rafters with inventory.

“The good news is that the mechanisms to move these market place fundamentals have been triggered.  Overseas, farmers are beginning to feel the crunch of falling farmgate prices in key export regions, particularly in Ireland.  This is significant as low farmgate prices are the first step towards slowing supply growth – much needed in a market still awash with milk.

“We are expecting a significant improvement in dairy prices by mid-2016 as the supply/demand fundamentals rebalance once excess stocks are whittled away and global production slows.”