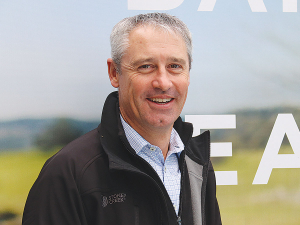 An air of uncertainty hangs over the whole agri sector, says the ANZ’s managing director of commercial and agri, Mark Hiddleston.

He told Rural News that at a time when the agri sector looks in really good shape with good prices at the farm gate and a positive outlook in overseas markets, the mood in the sector is flat.

Hiddleston says the farm debt burden is improving and the interest rate environment is good.

“Given all these things we should be celebrating and really proud, but it doesn’t feel that way.

“If you ask, ‘is the sector more or less bankable?’, [ANZ would say] the concerns that we – and our customers -- have in terms of the challenges we face [signal] that we are not sure. That’s because [the bank’s] customers are not certain about their compliance and sustainable farming requirements because these are still unknown.

“The same applies to the climate change accord.”

Hiddleston says the Reserve Bank’s capital proposal will put either put a constraint on the availability of capital or the cost of capital. The answer to this won’t be known until November, he says.

“This uncertainty is leading to a lack of confidence. When you go around the country that’s what you are feeling. People should be feeling happy, they are not underwater, but they are not feeling too confident and proud of what they are doing.”

Hiddleston believes there is a lot of positioning and politics going on at present over various things and says this will probably lead into next year’s election.

He says farmers want to lift their game and improve sustainable practices and believes there needs to be a conversation how best this can be done.

Bashing up farmers is not the way to get them to do more in sustainability and compliance, says ANZ’s Mark Hiddleston.

He says this will only lower their already low morale.

He believes farmer bashing is deterring talented people from entering the industry and farmers from investing in making changes to meet the new sustainability requirements.

“I call it the ‘thin red line’. In other words, farmers will do the bare minimum to avoid being punished,” he told Rural News.

“It’s like bringing up kids. You can either get them thinking positively as they grow up or you can beat them. My worry is that we are going to start beating farmers at a time when they need more reward and support.”

Hiddleston says he’s not suggesting farmers should be thrown massive subsidies, but if the market is paying massive premiums for the valuable products farmers produce, they should get a share of that premium.

He says that as a banker he has a role to play in this.

“Take for example a farmer who is investing in a more sustainable farm who will be receiving a differentiated payout and whose land is at least going to hold its value and the farmer is going to have the right to operate. Why shouldn’t they have a cheaper loan? This sort of thing is a better outcome and something that can be built on.”

Hiddleston also believes a generational strain is now starting to appear in the farming sector, imposing mental strain on the industry and discouraging new talent from entering the sector.

He believes change will be necessary and will require people with energy -- not necessarily young people -- to manage this change.

“But some of these things require physical involvement and if you are at the end of your career you may not have that energy because it is not a one or two year play. It is more like a 10 or 15 year play.”

Hiddleston says this phenomenon is not unique to the farming sector, but he reckons it’s worse because of underinvestment that has taken place, especially during the dairy downturn.

Why low morale in a good season?

Low morale and uncertainty in the dairy industry appear to be overshadowing the positive outlook for the sector.