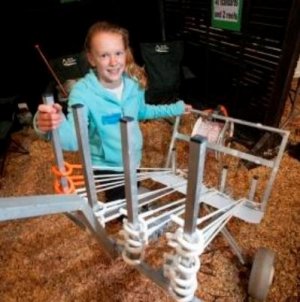 The Innovation Centre, powered by the University of Waikato, is the showcase for the best industry developments and inventions, improving New Zealand farming practices.

The winners of the Innovation Competition were announced at the Innovations Awards Breakfast attended by University of Waikato Chancellor Jim Bolger, Vice-Chancellor Professor Roy Crawford and representatives from Straight Furrow.

Guest speaker Dr Jacqueline Rowarth from the University of Waikato gave a rousing speech which mentioned the infamous Kiwi no. 8 wire ingenuity and the fact that New Zealand is fifth in the world for R & D development. She said that Fieldays was the ideal place for people to exchange ideas and it was great to see people making a difference.

Judges gave enormous consideration to the Innovations entrants and who should receive the awards.

The prestigious Golden Standard award which recognises excellence in innovation was awarded to Vernon Suckling of Ag Tech Industries Ltd with the invention of the "LifeGuard" ATV Rollframe. Designed to help prevent injury and save lives the LifeGuard was recognised as a large improvement to all industry. The award title is accompanied by $5000 cash, a certificate and a trophy.

The Premier Feature Merit Award, which reflects the Changing Face in Farming, was given to Janet Brooker of BioFert with a proven natural farm method of composting animal waste resulting in a high nutrient soil conditioner.

A James & Wells $3000 voucher for professional patent advice was awarded to Jody Scorer with her highly innovate project the "De Budder". Her invention approaches a simple but highly labour intensive task and is a nature based piece of equipment for bud removal, mimicking the circumduction of the human hand around a trunk.

The winner of the Equipment Category was awarded to Marty Richards with his eFeeder; an exciting new exit feed system designed to be simple yet effective with even food distribution and only 5% wastage. Marty wins $5000 worth of advertising, a trophy and a certificate. It was noted that he had worked his way through the award system over the years with prizes taken for previous entries.

The standard of entries in the equipment category was very high this year and therefore there were two Equipment Merit awards given; Gallagher Animal Management for their M2800i Fence Energizer System with remote fence monitoring technology and multiple means of fault notification, and, TracMap with their TackLink and TM465 – an effective fertiliser and spray ordering system, which has web interface allowing farmers to see paddock history on line and easily order products to be applied by paddock.

Twelve-year-old Jasmine Creighton was awarded the Young Inventor of the Year award with the Pigtail Transporter which she invented for her science fair project last year. The transporter carries 50 pigtail standards and up to four electric fence reels and is designed to be pulled along manually. She invented it for herself as she said she cannot carry many standards and had to put them all down while she pushed one into the ground. The judges were extremely impressed with her clever approach to a simple problem and the impressive research she had undertaken.

The Innovation Competition showcases inventions from New Zealand to the world and it also establishes their success in the marketplace by educating the entrants on how to take the next step to achieving commercial success.

New Zealand National Agricultural Fieldays is on now until Saturday June 16 2012 at Mystery Creek Events Centre, 10 minutes south of Hamilton. Tickets can be purchased online or at the gate, visit http://fieldays.co.nz for more details. Fieldays is proudly supported by strategic partners - ANZ and the University of Waikato.