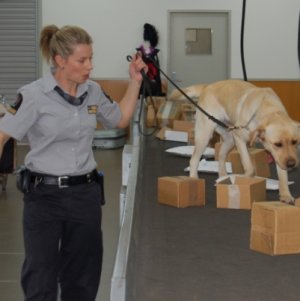 A survey shows the MPI is stopping international air passengers bringing in goods with a high chance of damaging New Zealand's biosecurity, but suggests the ministry could do more to stop lower risk items.

The survey conducted in Auckland, Wellington and Christchurch involved checking more than 8000 passengers to see if they were carrying goods that pose a biosecurity risk after passing through airport checks.

The survey showed 98.94% of passengers who had been through checks were not carrying medium or high-risk goods, including materials that may host fruit fly.

For passengers passing through Direct Exit lanes, the compliance rate for medium to high-risk goods was even higher – 99.54%.

The shortfall was mostly due to low-risk items like airline food packets and dirty shoes getting past biosecurity checks, says Roger Smith, deputy director general, verification and systems.

"In a number of cases, these items were only slightly contaminated, or were unlikely to have been exposed to biosecurity risk – such as toiletries containing honey", says Smith.

"There are clearly some areas we can improve on, but it is pleasing to see we are keeping out the goods that are most likely to cause harm to New Zealand."

"This result also supports the Direct Exit concept. It shows we are making the right decisions about who we clear to leave airports without x-ray screening."

He says MPI has started implementing recommendations from the survey to improve compliance, including looking at additional staff training where needed.

The survey was conducted at Auckland, Christchurch and Wellington airports between 14 May and 6 June. Together these airports account for 97% of air passenger arrivals.