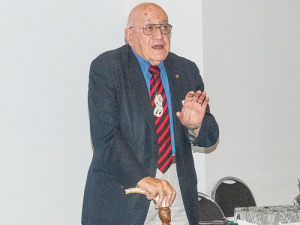 Ngāi Tahu elder statesman Sir Tipene O’Regan has backed genetic modification and the export of bottled water in a challenging address to a gathering of agricultural scientists at Lincoln.

He told a forum on Canterbury’s water resource, organised by the New Zealand Institute of Agricultural & Horticultural Science, that, “bottled water is the greatest, single opportunity this economy has”.

In a wide-ranging address, he also said rising sea levels were a commercial opportunity in the form of revitalised estuarine lakes as protein sources.

O’Regan noted that in his final report to the Crown, the retiring chief science advisor Sir Peter Gluckman had urged the country to reconsider genetic modification, saying genetically modified grass could significantly reduce our usage of water.

He says genetic modification has all sorts of potential benefits.

“The anti-GM brigade could be called the ‘pro-diabetes brigade’ because diabetes sufferers are kept alive with insulin made by genetically modified bacteria.”

He said only one thing is worse than GM in Canterbury and that’s water bottling. He said it takes 40L of water to produce 1L of milk, but we then drain all the water out and sell it as milk powder.

“The export value of the water itself is vastly greater than that of the milk powder. We don’t seem able to get our heads round that. We have these ridiculous arguments all about puddles and ditches, while there’s great big conundrums like that sitting in front of us.”

NZ should be harvesting and storing water, he said.

“The West Coast ‘pours itself out’ into the Tasman Sea, while the Waimakariri flows out into Pegasus Bay. That is a phenomenon going on right down the eastern seaboard from Napier to Foveaux Strait,” O’Regan said.

“Hawkes Bay goes into almost orgasmic spasms over Ruataniwha, while billions, trillions of litres of water are bubbling up every day just outside the Napier wharf.”

He said the greatest thing about the South Island is that it is an engine for the production of water, and the West Coast would only get wetter with climate change.

“If this was the 1930s we’d have our engineers out there dreaming. We wouldn’t be throwing it away. The biggest thing we’ve got is water. Find the engineering solutions to store it and use it more creatively.”

He says some sea level rise predictions are terrifying, but he believes it offers opportunities for a different way of thinking about estuarine lakes and the flatlands surrounding them.

“Why would I like to see those estuarine lakes restored? Because they could be one of the biggest sources of protein we’ve got. I just go back to Mahinga Kai.”

O’Regan says the whole country lives off 50mm of topsoil and the population is set to double.

“If we can’t rethink our model, we’ll be sending our children to an extremely fragile and difficult existence.”

He says we must think of other ways of growing grass. And NZ also faces a “heritage issue” of phosphate in the soil.

“We destroyed the fundamental economy of Nauru to achieve that and we are now one of the few countries still at it, doing the same thing to areas of the Sahara. That [cannot] continue; it is not sustainable,” he said.