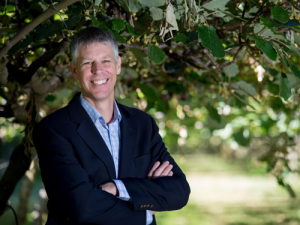 Zespri chief executive Lain Jager is the Ravensdown Agricultural Communicator of the Year.

The award honours those who make a significant contribution to the sector and the role they play in making New Zealand world leaders in primary production.

Jager is credited for running the best business in the primary sector, taking the kiwifruit industry from crisis to global success - now supplying 32% of global trade.

“Lain is one of those natural leaders that can take a nation with him,” says Greg Campbell, Ravensdown chief executive, “his accessibility and ability to connect with people on any level are paramount to his success. The journey Zespri has been on from the PSA outbreak to today is testament to that.”

“Communicating the opportunities and challenges facing the agri-sector has never been more important. The industry is full of talented, insightful and enthusiastic individuals who connect with people in a variety of ways. This award is about celebrating all those champions as well as acknowledging the efforts of one individual,” says Campbell.

"That’s why we’re thrilled to be able to support the New Zealand Guild of Agricultural Journalists and Communicators with this award.”