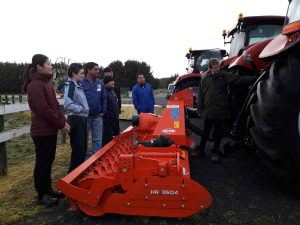 Some of the first intake of 20 at the SIT training course at Telford for those interested in learning for roles in rural contracting or farming. The courses are being supported with machinery and tutors from Rural Contractors NZ and its members. At right, tutor David Toole of Hughes Contracting.

Despite eagerness from out-of-work Kiwis, the ag contracting industry will still need to continue importing experienced, overseas workers for some time yet.

“These locals need to be trained and won't have the skills to drive the big, complex machinery for a while, so we’ll need to carry on importing our Irish and UK guys,” says Rural Contractors NZ (RCNZ) president David Kean.

His comments follow two expos, held this month, to promote the sector, which saw rural contractors ‘blown away’ by the turnout with a number starting to recruit locally to fill vacancies. He says the Queenstown and Te Anau expos saw more than 160 people through the doors.

However, Kean says ag contractors will still need to bring in some skilled machinery operators from overseas for the spring/summer season – as few new recruits will have developed sufficient skills to drive the more complex agricultural machines.

Kean was impressed with the calibre of those attending the expos, describing it as a mix of New Zealanders and the United Nations, with many of the attendees having an aptitude to drive contracting machinery.

“There was a 75-year-old man and two women in their 50s. We’ve never seen such interest in contracting,” he explained “We had one woman whose job had been to drive a bus to Milford Sound. If you can do that run, you can drive a tractor.”

However, Kean points out that this is a different skill to operating a complex piece of machinery – such as silage harvester. He adds that such machinery is essential to the NZ farm sector as contractors often serviced dozens if not hundreds of farms.

“Balers and forage harvesters are two of the most critical machines for New Zealand at the moment. Drought ravaged Hawkes Bay, alone, needs 300,000 bales of feed and every available blade of grass needs to be expertly harvested.”

Kean says Irish and UK operators came to New Zealand in their off-season and were often teaching local contractors about how to operate the latest models of equipment.

“While we are encouraged that we can finally bring more New Zealanders into the fold, they’ve got to spend time lifting their skills before they could get into the cab of some of the machines contractors operate.’’

He says RCNZ is working with Federated Farmers to put a case to the Government to consider foreign machinery operators to be classed as having essential skills and be allowed to come here in spring.

“Contractors are happy to work with the Government and pay for the necessary quarantine arrangements,” Kean adds.

With a lack of overseas workers, New Zealand’s pork sector is calling on the government for urgent action.