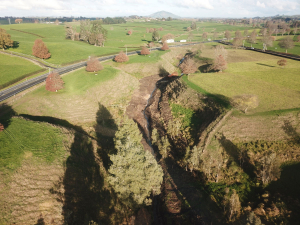 The prosecution was taken by Waikato Regional Council under the Resource Management Act following a complaint from a member of the public and subsequent investigation.

The sentence was imposed in the Hamilton District Court by Judge Melinda Dickey on 29 November having heard that the defendant, Dennis Veen, used his excavator to dig up approximately 500 metres of stream bed, in the base of a gully system 600 metres upstream from the Waipā River.

When asked by the council for an explanation, Veen stated he was "cleaning our his drains".

The council case confirmed that the stream provided a natural habitat for a selection of native fish species and caused a significant discharge of sediment, a main contributor to contamination of the Waipā River.

In sentencing, Judge Dickey considered the defendant's lack of awareness of the rules protecting natural watercourses and commented that he "was highly careless to have not made any inquiry about the rules applying to such activities".

"This is a stark reminder to anyone who sits at the controls of an excavator, that there are very clear protections in place prohibiting the destruction of wetlands and river systems," says Council  regional compliance manager Patrick Lynch.

There are clear guidelines and rules around earthworks activities to reduce any negative impacts of sediments and erosion. Information is available on the council website at waikatoregion.govt.nz/earthworks or by calling 0800 800 402.