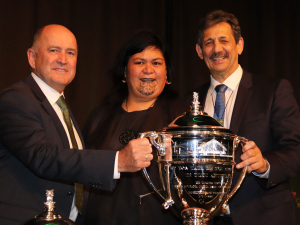 The 2020 Ahuwhenua competition will mark the first time horticulture is included.

Mahuta told delegates at the Horticulture New Zealand conference in Hamilton that next year will see Māori farmers, trusts and incorporations compete for being the top Māori horticulture enterprise in the country.

“Up until now, the competition has only involved sheep and beef and dairy, but with the rapid growth and investment by Māori in horticulture, it is now part of the competition”.

O’Connor announced that government financial support for the event would also increase.

“Māori are significant players across our horticultural sector, both in the fruit and vegetable industries, and across the supply chain. Māori agribusiness will be a big part of New Zealand's future,” he said.

He announced that Te Puni Kōkiri and MPI will be platinum sponsors of the Excellence in Māori Horticulture Award in 2020. Part of this sponsorship will include 12,000 tree seedlings supplied by the Minginui Nursery, and made possible through the One Billion Trees Programme.

The competition is designed to promote excellence in Māori Farming and Horticulture. A special cup, identical to the ones for dairy, and sheep and beef has been crafted especially for next year’s event.

“It is an exact replica of the trophies designed by Goldie, the New Zealand artist renowned for his paintings of Māori leaders and communities,” says Mahuta.

“The creation of the trophy has been an international collaborative effort between The Village Goldsmith in Wellington, Te Puia, the New Zealand Māori Arts and Crafts Institute in Rotorua, and the firm of Ottewill who are based in Ashford in the county of Kent, southeast of London,”.

Mahuta says Māori are now major players in the horticultural sector, producing at least 10% of the annual kiwifruit crop, as well as avocados and berries as rapidly expanding crops.

“Right across the primary sector Māori are excelling. They are taking ownership of their land, forming collaborative partnerships, taking their products directly to world markets and this all adds to the establishment of profitable and sustainable businesses that are guided by Māori values.

“Government is dedicated to improving the economic and social wellbeing of Māori,” says Nanaia Mahuta.