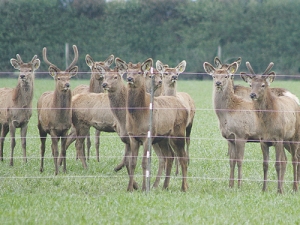 Deer may offer a good alternative to dairy support in the current economic climate.

The deer industry hopes its good prices will stem the decline of the national deer herd and even cause a slight increase, Deer Industry NZ chief executive Dan Coup says.

Deer may offer a good alternative to dairy support in the current economic climate.

Coup says the deer herd has been declining for at least 10 years. As with other drystock species, a steady drop has persisted because of expanding dairy support.

"That's been the story of the last few years but that is obviously changing a bit at the moment.

"This declining herd concerns us because at some point your scale of efficiency on things like processing, marketing campaigns, research and having an office in Wellington all gets marginal.

"Shrinking forever is not a good strategy. We would like to get to the point where people are significantly confident in the future of deer that they go back to growth. Not for the sake of it but to preserve our scale."

It is stability the industry needs, not big growth swings.

"We are not out there selling it to people but we want existing farmers to feel good enough about deer that they stop getting rid of them, which is what has been happening.

"This season's prices are pretty reasonable considering the many options they have for their pasture at the moment. The deer at these prices are a reasonable choice."

Beef is good as well but considering the dairy and the lamb options, farmers are probably happy if they have deer at present, he says.

Hinds made up nearly 55% of last year's venison kill, which means the national breeding herd and the annual venison kill will continue to decline. The total kill in the 12 months to November 30 (stags and hinds) was 383,740, down 7.5% on the same period in 2014.

"One reason for the high proportion of hinds in the kill is that some farmers are retaining stags to rebuild their velvet herds, in response to a five year run of firm velvet prices," Coup says.

"All the same, it would be good to see hinds making up a little less than 50% of the total. This would result in a small annual increase in the hind herd, which has to be for the long term good of the industry."