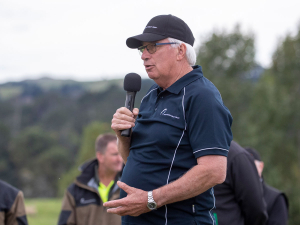 A field day at historic Gwavas Station, Tikokino in Central Hawke’s Bay this week attracted a good crowd of people keen to see why this property is a finalist in this year’s Ahuwhenua Trophy for excellence in Māori sheep and beef farming.

The farm is owned by the Te Awahohonu Forest Trust which has Tarawera Station on the Napier Taupo Road which Gwavas complements. Gwavas Station is a 1,178 hectare (989 effective) property on which is wintered 12,000 stock units – split 50/50 between cattle and sheep. Three full time staff run property with input from two advisors.

Bob Cottrell, Te Awahohonu Forest Trust’s chairman described the turnout of people at the field day as exceptional.  He says he hopes people go away from the field day with a good understanding of who the owners of the farm are and what they are doing.

The field day at Gwavas is the second of three field days to be held over three weeks. The final field day will be held at Kiriroa Station owned by Eugene and Pania King at Motu, 70km north west of Gisborne.

The field days are open to the public and are an opportunity for the finalists to demonstrate why they were selected as finalists for this prestigious award which was inaugurated 86 years ago by the great Maori leader, Sir Apirana Ngata and the Governor General at the time Lord Bledisloe.  Kingi Smiler, the Chairman of the Ahuwhenua Trust Management Committee which runs the competition says the field day at Gwavas Station was an excellent event which highlighted the thought and work that had gone into developing the property.

“It was a good example of the strategic planning that had been undertaken by its owners the Te Awahohonu Forest Trust. They bought Gwavas as a finishing block to complement their other property, Tarawera which is largely a breeding operation. This shows that Maori are creating new farming enterprises that will help build resilience and mitigate risk to deal with volatile climatic and market conditions”.

Smiler says it is good to see large numbers of people turning up to the field days which are an integral part of the Ahuwhenua competition. He says the field days are chance for Maori to show the quality and professionalism of their farming operations.

“We are not just talking about good Maori farms, we are talking about farms which stand alongside some of the best farms in Aotearoa,” he says.