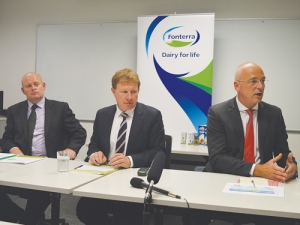 Fonterra farmers are looking forward to higher returns as a result of the co-op's capital expenditure.

"It is now very important that these strategic initiatives are backed by tangible returns to our farmers on the investments they have made in the co-op," he told the annual meeting.

He says farmers are backing Fonterra's strategy of shifting more milk into higher returning products. "We can already see this working in the first quarter results announced recently."

He noted the co-op had used its strength to help farmers during a tough year, increasing earnings in the second half and raising advance payments.

"This demonstrated the co-op using its strength to help farmers when they needed it the most," Coull said.

He said the recent events in Europe, including the shooting down of a Russian plane by Turkey, are further compounding the markets. So Fonterra needs to stay the course and stay focussed on strategy.

"We look at things we're doing well and do them faster; things we're not doing well we need to improve on," he says. "These are the things we can control; we can't control the other things happening around the world."