High prices in China not good for NZ 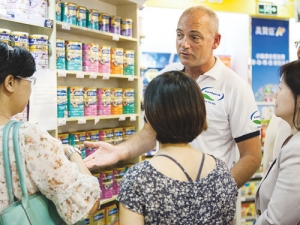 Fonterra chief executive says the co-op will move to bring down consumer prices in China if no one else acts.

On-shelf dairy prices for consumers in China are too high so demand is not growing, says Fonterra's chief executive Theo Spierings.

Fonterra will move first to bring consumer prices down if someone else does not, he told Rural News.

Spierings says Chinese consumers are paying too much and NZ farmers are getting too little.

A can of infant formula costs three times more in China (36 euros equivalent) than in Europe (12 euros).

"Out of the spike of the milk price [last year] the industry priced the products up and kept the prices up there," he says.

"A whole lot of margin is being made by the trade which in part should go back to the consumer and money should come back to the farmers. The consumer is paying too much and the farmer is getting too little."

But Spierings warns it will correct itself if prices stay high, with a switch to alternatives such as vegetable oil and soy protein.

"If people lose market share they will react. Dairy is stable but not gaining, and even in some South East Asian markets, with what is happening to the economies, you see declining share.

"The problem in emerging markets is that if your price is at a relatively high level you don't want to go down alone because that indicates there might be quality issues. The way people behave... they think, 'that brand is pricing itself down – why is that? Is there an issue?' "

Spierings says the dairy industry needs to adapt and get back to volume growth.

"That's most important for farmers – demand growth. We need to see stronger demand growth, but if not the milk price will stay at a low level.

"What you saw with the uplift of GDT was supply – everybody could see supply was restricted: the US and the Europeans were going down; but demand is still weak.

"The spike up is supply driven not demand driven, and demand is what you want to see because you get a better milk price."

Neither does Spierings want any panic in the market, which he says would take the farmgate milk price back to unsustainable levels of $8/kgMS.

Part of the problem for the consumer prices was the spike to US$6000/kgMS. That was not healthy either. He believes these should be US$3500-US$4500 – yielding a milk price of $6-$7/kgMS and the rest paid as a dividend.

While they are not at that stage yet, he says everyone can see the weather pattern.

"I was just in China, Malaysia and Indonesia; Indonesia is super dry: the country is burning, they are closing down airports and schools.

Flat market needs to pick up

"If the price is too high when we go to markets it triggers all sorts of wrong developments," he says. "All domestic players in China are dropping [in sales] and parallel importing is increasing because of the low price in Europe and the low euro.

"These are all the wrong developments for China and for us."

Malaysia and Indonesia have negative volume growth and China is flat. "These economies are key markets, they need to pick up.

"The good news is the governments of these countries know that an emerging economy cannot survive for long with flat or negative volume growth. You need to see volume growth in emerging markets."

Spierings believes these governments will act to stimulate their economies.