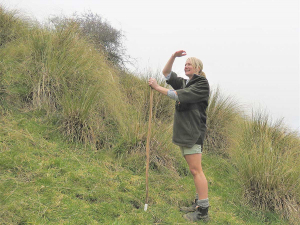 "This couldn't be further from the truth," Smith told Rural News. "I fully support these groups and what they stand for. They are quite simply ensuring that farmers, councils and rural communities have full, unsanitised narratives on all matters that will affect both them and future generations".

Smith, along with the Rural Advocacy Network's Jamie McFadden, were the key speakers at a recent round of Groundswell-hosted public meetings.

"There are no hidden agendas here, in fact, quite the opposite," she says.

"Groundswell is not spending time in Wellington reshuffling the appeasement deckchairs. These issues come straight from discussions around kitchen tables, boundary fences and country halls and down the country."

Smith says farmers, councils and rural communities are worried about proposed regulations changes - such as the new freshwater and greenhouse gas rules.

"In many cases, they are more concerned about what they don't know," she adds. "Farmers are owed the respect of ensuring that the representation they have on these issues if fit-for-purpose and reflects genuine long term win-win outcomes for both the environment and rural communities."

Smith points to the confusion between the Government-developed farm environment plan (FEP) versus a genuine farmer-driven plan, along with the gross misunderstanding of the magnitude of a Significant Natural Area policy as the rational for her to support these farmer-led groups in speaking out.

"Both of these issues should be top of mind for all primary sector players. A Crown-generated generic template served with a $50 million sweetener is RMA driven, not market-led and will be admin heavy and innovation light," she told Rural News.

"Anything driven and audited by the Crown can be sought as public information and will never encourage a catchment-wide collaborative approach that is already working so well."

Smith says claims that these farm plans are an alternative to resource consents is bending the truth.

"By any other name, these will simply be a lengthy form of resource consent.

"There are a myriad of fit for purpose farm environment plan templates already being utilised that actually result in better farmer pride and better outcomes."

Meanwhile, Smith describes the Significant Natural Area (SNA) issue as “the most pressing issue for farmers and district councils to understand the implications of immediately”.

She believes this makes the proposed water and carbon regulations look like child’s-play and should be keeping every landowner and district councillor awake at night.

“It will impose impossible burdens on district councils, severe restrictions on land use, weed and pest control issues beyond any landowner’s capability and have implications for farmer equity and land value”.

She says, as an environmentalist, the thing that makes her sad – similar to the generic freshwater and wintering regulations – is that this SNA policy is poorly thought out.

“It is a sledgehammer to do the job of a scalpel and will not lead to better environmental outcomes. It detracts from the global-leading intergenerational template that the QE II trust has in place – covenants that secure land stewardship in perpetuity, without putting at risk the viability of farming surrounding land.”

Smith reckons rural banks should also be right at the forefront on this issue.

“Forget the feel-good environmental loans – this policy has the capability to make many farmers insolvent”.

Smith believes that the wealth of information that Groundswell and Rural Advocacy Network’s Jamie McFadden has aired is important – not to heighten fears, but instead to give clarity.

“The ability to shoot from the hip and expose issues for what they are is a crucial asset to the industry at this point in time”.

She says heightening awareness, working as one and coming up with concise plans of action is what farmers are looking for.

OPINION: "Where the bloody hell are you?"

Concerns raised about the serious conflict of interest of a key Ministry for the Environment (MfE) staffer involved in the controversial freshwater reforms has led the ministry to implement a new system to mitigate future issues.