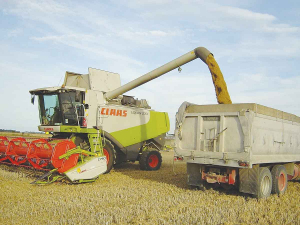 It is claimed that farmers don’t seem to know about the advantages of feeding grain to livestock.

Talbot is a South Canterbury arable farmer and long-time proponent of farmers using more NZ-grown grain to feed their livestock.

He believes the current drought in many parts of the country, and the resulting shortage of hay and baleage, is an ideal time for the practice of grain feeding livestock to be highlighted.

“In a normal year, feeding grain at flushing increases the ovulation rate and therefore the conception and lambing percentages by 15-25%,” Talbot claims. “Beef and lamb figures suggest that on the average sheep farm a 5% decrease in the lamb crop is worth $60,000.”

He told Rural News the cost of the grain to feed an average flock would be less than $10,000.

Talbot adds that with the current climatic conditions around NZ, where much of the country is in a drought situation, grain seems to have been forgotten as a viable and economic livestock feed option.

“With farmers chasing hay or baleage – and not looking at the total costs – is seeing them make even bigger losses,” he claims.

“This reason for not looking at grain is, I believe, the constant use of kg DM to cost the feeds, along with a complete lack of new information about the advantages of grain.”

Talbot says that when buying any feed, farmers are actually buying megajoules of metabolisable energy (ME) and therefore should be looking at the cheapest cost per ME.

“To use the kg DM as the basis for your costing, then the cheapest feed would be sawdust as it’s free. Not good for the animals though.”

He adds that Beef+Lamb NZ, and others, have produced feed tables based on both cents/kg DM and cents per ME.

“In all cases, grain comes out as the one of the cheapest options before any transport is considered.”

“So, the transport costs are under a third – making it cheaper again than all other feed options.”

Talbot also dismisses claims that when it comes to the feeding grain, expensive machinery is needed.

“It can be feed with a simple feeder made from an oil drum, and 1000 ewes can be feed in four minutes,” he explains.

Unlike hay or baleage, which can take about an hour to feed out, there is no plastic or net wrap to remove or dispose of or any expensive feeding machines required.

He adds that grain, when fed to sheep and deer, doesn’t need to be crushed.

In fact, doing so can give rise to problems due to the quicker fermentation process.

Pioneer forage specialist, Ian Williams on how farmers can manage feed and animals as they move into winter.