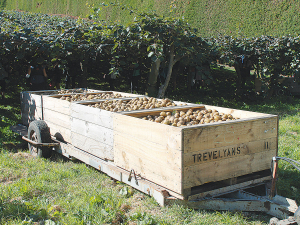 An anonymous group called Concerned Growers Collective is opposing two Zespri resolutions now before growers which the group claims would cause “irreparable damage” to the industry.

Read: Zespri says it is disappointed at the “inaccurate” claims being made by the anonymous Concerned Growers Collective.

Zespri went on a roadshow in the past two weeks asking kiwifruit growers to vote in support of two resolutions: 12-month marketing and ownership by Zespri of all plant variety rights (PVRs).

The poll will finish on March 15 and is counted in two ways; resolutions generally need 75% support.

The mysterious Concerned Growers Collective has told growers a ‘yes’ vote “will lock in a new strategy for Zespri whereby it earns 85% of its profits from licences that should belong to you and New Zealand, and also allow it to grow and sell kiwifruit from anywhere in the world (other than China and Chile) ahead of yours”.

The group, which would not field someone to speak to Rural News, claims on its website and in printed material that members are second generation growers who wish to remain anonymous to ensure discussion “is focused on the issues not personalities”.

“Sadly, there is a history in the industry of personalising and characterising issues, which distracts from sensible and informed debate,”  the group says in a statement.

“While these resolutions are good for Zespri shareholders, there are significant risks to New Zealand kiwifruit growers that have not been considered fully or even debated by the industry.

“A ‘yes’ vote will permanently change the drivers of Zespri from marketing New Zealand-grown kiwifruit to a corporate that is focused on the international fruit trade and variety development to the benefit of its shareholders.”

The group claims it has sent letters to all growers through NZ and is getting positive support. It says the resolutions are in essence asking growers to approve:

- Marketing kiwifruit grown in those countries 12 months a year

The collective says it supports the single point of entry and that NZ has desperately fought to maintain that status under international pressure to deregulate.

“Ownership of PVRs by Zespri will greatly decrease our ability to defend this position,” the group claims.

“The proposal to entrench ownership of kiwifruit varieties also misappropriates the investment of NZ growers and the NZ taxpayer in the kiwifruit industry, particularly the new varieties of kiwifruit being developed by Plant & Food Research Ltd for Zespri.”

The dissidents want grower ownership of PVRs under a separate entity.