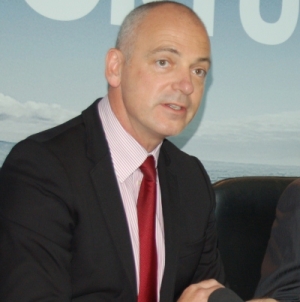 Fonterra has announced a half-year net profit of $459 million, a 33% increase over the previous year.

The co-op puts this down to a robust performance by NZ Milk Products and significant lifts in sales volumes in Fonterra's Asian and Latin American brands were behind the However, these achievements were partly offset by continuing challenges affecting its Australian business.

"NZ Milk Products' performance was achieved through increased volumes, effective management of our product mix and a focused effort by the sales team to achieve higher price premiums compared to dairy commodity prices," he says.

"Despite the drought taking effect in the North Island in January, it was a different story for those in the South Island where the rainfall was higher than last summer. Fonterra's milk collections for the season to the end of January were up 6 per cent on the same period in 2012 – which in turn flowed into record production, and another new export volume record achieved in December 2012."

The commissioning last year of the new Darfield site – where the Darfield Drier 1 can process 2.2 million litres of milk at peak in one day and produce 15 metric tonnes of milk powder per hour – was one of the factors that enabled NZ Milk Products to process the higher peak milk flows and deliver a strong performance.

Spierings says the business reacted swiftly to higher price signals for cheese, casein and milk protein concentrate compared with whole milk powder and other powder prices for most of the first half of the financial year.

"By moving our discretionary manufacturing, we were able to take advantage of this pricing differential. This flexibility at an operational level was a significant contributor to NZ Milk Products' 9% rise in sales volumes to 1,474,000 MT.

"At the same time, the sales team kept its focus on adding value for customers and attaining prices for products above GlobalDairyTrade (GDT)."

Despite the average US dollar commodity price being 16% lower than the same period last year, NZ Milk Products' focus on performance was reflected in a 65% increase in Normalised EBIT to $422 million.

The Australia-New Zealand business' earnings declined, with normalised EBIT down 32%.

Spierings says while its consumer business performance in New Zealand was slightly better than last year, Australia's consumer business had to contend with a very competitive retail environment. Meanwhile, the ingredients business experienced a significant margin squeeze as the competition for milk supply in Australia intensified.

This was compounded by an adverse product mix due to lower demand in the export sales of value-added nutritional powders, and more milk being channelled into lower value milk powder sales.

With the strong first half performance, the Fonterra board has lifted the interim dividend from 12 to 16 cents, 33% cent higher than the comparable period. Sixteen cents represents 50% of Fonterra's forecast dividend for the current financial year, and the maximum available under the 40-50 per cent range in its dividend policy.

The interim dividend will be paid on April 19.