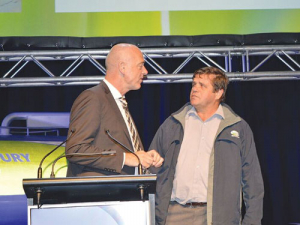 Speaking at the co-op’s annual meeting in Canterbury this month, Wilson outlined a raft of assistance provided to cash-strapped farmer shareholders in 2015-16.

Last season, the final payout was below the average cost of production for most farmers; the co-op paid $3.90/kgMS as the farmgate milk price and 40c/share dividend or a final cash payout of $4.30/kgMS to 100% shared-up farmers.

Wilson says total earnings per share were 51c and the 40c dividend met the board policy of retaining 65-75% of normalised earnings over time.

He says the dividend was paid while lowering debt by $1.6 billion, resulting in a year-end gearing ratio of 44.3%.

“With 2016 being such a tough year, our response was to return every cent of value back to shareholders in the short term,” he says. “And at the same time, we are protecting our co-op over the long term by responsibly managing our balance sheet.”

Despite the low milk returns, Fonterra stayed on course with its strategy, and accelerated changes started three years ago as part of its business transformation.

Wilson says the end result was a cash payout “at the highest level we believe we could possibly have achieved”.

“Importantly our management team focused on delivering the cash back to our farmers as quickly as possible.”

Wilson says everyone talks about a strong co-op getting stronger; the milk price is a good example. Fonterra’s milk price manual sets a high bar for performance, he says.

“Each year we aim to beat it and when we do the gains come to [farmers]; for example, since 2009 our co-op has made efficiency gains in our plants, improved yields, reduced overheads and the weighted average cost of capital has decreased.

“As a comparison with this year’s earnings per share at 51c plus that 36c, our co-op has in fact delivered over 85c in value on top of that 2009 milk price.”

Wilson says when milk prices fell at the beginning of the 2015-16 season, Fonterra immediately made its support loan available on milk made up to December 2016. The co-op advanced $383m, and 76% of shareholders took up the loan.

“These advance dividend payments saw the surplus cash generated by efficient working capital management pass quickly through to our farmers.”

Wilson says this year $10.5m Farm Source reward dollars were earned. More than $18m in savings on fuel, energy and farming basics were passed to farmers.