Farmers must do the right thing on M. bovis 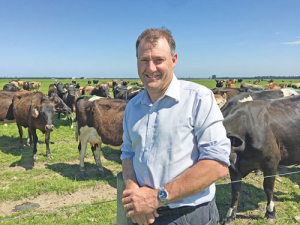 Farmers selling cattle have a duty to disclose if the animals have been under Mycoplasma bovis testing, says Dairy Holdings chief executive Colin Glass.

Non-disclosure might not be breaking any laws if the selling property was not under a MPI notice of direction or a restricted place, but it is a matter of integrity, he believes.

“Some people have been a little bit cute,” Glass told Rural News.

“You’ve still got a duty to disclose that information if they’re under testing that hasn’t been positive. Now some people put that in a contract and some people don’t. But even still, I would have thought we’ve still got to do the right thing.”

As head of Dairy Holdings, Glass runs the country’s largest corporate dairying business, milking 51,000 cows on 60 dairy farms supported by nearly 20 of its own grazing blocks.

He says being relatively self-contained has helped the group remain M.bovis-free despite a number of scares. One farm currently has a couple of trace animals being tested.

However, Glass’s comments relate to a particular incident when a DH farm bought stock after asking for “a lot of representation” from the vendor that the animals were clear. Two weeks later, MPI unexpectedly contacted the company, saying they were trace animals that had already had two lots of tests and needed to have their third.

“So we were really really disappointed. Fortunately, the animals tested clear but what we were disappointed with was that the representation from some farmers is not quite as honest and complete as it could have been.

“I make the comment because I think it’s important that farmers ensure their own integrity is intact as we go through these processes.

“The last thing we want is people signing warranties and giving you undertakings that animals are clear or that they haven’t had any testing, and then you find out only a couple of weeks later that’s not actually right.”

Glass, a director of DairyNZ, says he would not have been concerned if that had been the only case he was aware of, but he has since heard of several cases where buyers had been given “those same flippant warranties”.

“It’s just a nice wee reminder that integrity is pretty important at these times.”

Glass says Dairy Holdings has had several traces done over the last six months and fortunately all came back clear.

“So we’ve never been under any notice of direction or anything like that yet, but we’ve a had a few scares along the way,” he told Rural News. “I think that’s no different from a lot of people, really.”

Glass says the company is now introducing a wider strategy towards becoming even more self-contained, partly in response to M.bovis, and in aid of general biosecurity and taking greater control over how its farms operate.

“The pathway we’re now on is that our contract milkers and share milkers are more than welcome to rear their own stock. But if they want to do more than that, if they want to bring stock into the herd, they’ll have to run those stock on our own internal grazing blocks.

“What it really means is that for the future in Dairy Holdings, for our people to grow and develop, they’ve either got to rear stock and run them internally or they’ve got to buy them from other contract milkers and sharemilkers within Dairy Holdings.”

Glass hopes the new strategy will bring a double positive: from the stock becoming worth more due to its disease-free status and an increase in farm performance. through increased herd stability.

“We’ve seen over the years, when herds have been made up from outside, that the performance of the herds can be quite variable.”