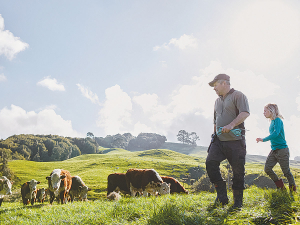 A recent survey has revealed the majority of New Zealanders have a favourable opinion of the primary sector.

New Zealanders' overall attitude towards the primary industries is on the up, according to a recent online survey.

The early December study, carried out by specialist agriculture advisory firm Primary Purpose, shows that the majority of New Zealanders feel favourable towards the primary industries.

The company says there were a range of reasons driving this view, but the dominant one (expressed by 32%) was the belief of how critical farmers are to the economic wellbeing of New Zealand by providing jobs and exports.

The next most common theme (25%) was the essential role farmers played in providing New Zealanders with quality, safe and locally produced food.

Primary Purpose says that even though the ratings for sheep and beef, and dairy farming have slipped from the 2020 result – they both remain in positive territory and higher than those recorded in 2019.

“There also continues to be substantially more New Zealanders on the favourable side of the fence for pastoral farmers,” it adds.

“We believe this data provides a positive contribution to the discussion about the urban-rural divide,” says Primary Purpose research and insight lead Mark Elliot.

“Especially as it shows the majority of New Zealanders have a positive view of our food and fibre industries.”