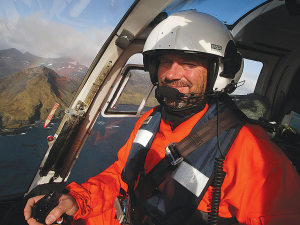 NZ Agricultural Aviation Association (NZAAA) chair Tony Michelle says the rising fertiliser prices are not having any effect on the use of aircraft to get the fertiliser on their pasture and crops. Michelle is a well-known helicopter pilot and has flown in many parts of the world including the Falkland Islands.

However, he says that farmers seem to be applying smaller dressings of high analysis fertiliser more often, which potentially increases the activity of the aircraft. He says they are also probably seeing a lot more lime going on than in past years.

"I think farmers are just getting smarter about what they do and when they do it and right now they are applying fertiliser more often. We are seeing this coming in the form of smaller and more targeting dressings," he told Rural News.

Michelle says this has been driven by the nitrogen caps and says farmers can no longer just drop 300 kilograms of urea on their farm and walk away.

"They are limited by the amount fertiliser they can apply each time."

He says dealing with climate change and the huge raft of legislation coming into force around it will be a priority in his new role with NZAAA. He says there are changes at the local, regional and national level coming in at different time frames and keeping abreast of such change is important to his members.

Tony Michelle says another challenge is ensuring that people in urban areas have all the facts in front of them when it comes to makig comments about ag aviation.

He says, some years ago, Horizons Regional Council produced a display which effectively demonised the ag industry.

"It was going around schools and one of the children of one of our operators came home very upset because they had a picture of an aeroplane flying along putting fertiliser into a stream and abovie is a banner saying - 'bad man'," he told Rural News.

Michelle says his aim is to see the good news stories out there explaining that the ag aviation industry has systems and technology to ensure that it doesn't put fertiliser and sprays into waterways and it mitigates these risks.

He says another positive contribution the ag aviation industry makes is around pest control.

"If we are to get to 'predator free 2050', the country will be heavily reliant of ag aviation.

"If there is a pest outbreak here in NZ, then it's likely to be the agricultural aviation industry that the regulators turn to for help rectify the problem."

Michelle says the work of the ag aviation sector adds $2 billion in GDP to the primary sector, which he says is quite significant.

Down to the wire

Farmers don't seem to get it. So says New Zealand Agricultural Aviation Association (NZAAA) chair Alan Beck, commenting on farmers understanding their responsibilities to make their farms a safe workplace for agricultural pilots.

Agricultural pilots, flying rotary and fixed wing, have again been warned not to overload their aircraft.