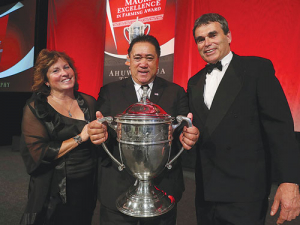 Omapere Taraire & Rangihamama Trust were named as the winners of this year’s Ahuwhenua Trophy BNZ Maori Excellence in Farming Award at a dinner held in Whangarei. Photo John Cowpland / alphapix.

About 700 people in late May attended a gala awards night in Whangerei, to see Omapere Rangihamama Trust farm, near Kaikohe, awarded the Ahuwhenua Trophy.

The trophy, a medal and a replica trophy were presented by Prime Minister Bill English to the chairman of the trust, Sonny Tau. The trust also took away $40,000 in prizes.

The other two finalists were RA and JG King Partnership of Puketawa Station, near Eketahuna, and Pukepoto Farm Trust at Ongarue, near Taumarunui.

Omapere is a 902ha (effective) mixed sheep and beef property whose borders include Lake Omapere. It is now transitioning to mainly bull beef rearing. Since 2007 the trustees have been working on substantial improvements.

Kingi Smiler, the chairman of the Ahuwhenua Trophy management committee which runs the competition, says Omapere has a strong strategic and practical commitment to improving the property’s environment, so benefiting their whānau and all other people in the district.

He says Omapere is also doing a lot to encourage its young people to make a career in agribusiness by offering scholarships; this highlights their intergenerational thinking.

Sonny Tau, the chairman of the trust which owns Omapere, says winning the trophy is a big boost to its 3500 shareholders. The trust has struggled over the years, and the win is a great reward for this effort.

“I knew we were in there with a chance, but when the announcement was made it felt great,” Tau told Rural News.

“As for the experience of entering Ahuwhenua, at the beginning I was a bit sceptical about it. But once we got into the finals we were totally committed to the process and gained a lot out of it. Another bonus was the people we met.”

Tau says the feedback they got through the judging process is prompting them to make changes on their farms.