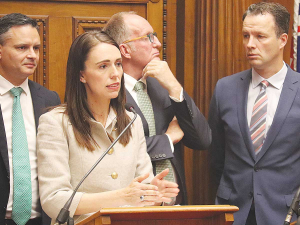 Dealing with agricultural emissions is very much on the radar of farmers, says Beef + Lamb NZ chief executive Sam McIvor.

He told Rural News that recent surveys of farmers by BLNZ show that dealing with agricultural emissions is a high priority, as are animal health and farm efficiency.

His comments come after primary sector leaders and the Government late last month struck a deal which means farmers won’t have to start paying for their emissions until 2025, provided they make progress in finding ways to measure and price emissions at farm level.

There will help from the Government and incentives for agriculturalists proactive in dealing with their on farm emissions.

The plan will see both parties working together to develop practical and cost effective ways to measure and price emissions at farm level by 2025. Meanwhile, legislation will still be passed putting agriculture into the Emissions Trading Scheme (ETS) from 2025, with a 95% discount rate.

But the Government has put a ‘backstop clause’ into the legislation. This states that if it is proven that the agricultural sector hasn’t made sufficient progress by 2022 the Government will intervene and put the sector into the ETS earlier at processor level.

McIvor says the advantage of the agreement with the Government is that it puts agriculture more in the driving seat.

He says arbitrarily putting farmers into the ETS now would have resulted in a lot of volatility.

“My experience with farmers, over a long time, is that once you put the facts in front of them and the decisions are made then they just want to get on and do the right thing,” he told Rural News. “Now that we have this legislation, we need the Government to tell us what to do.

“Farmers are really interested [in the range] of Government policies coming out that are broadly in the environmental space, such as water, elite soils and biodiversity.  I think farmers are trying to work out how to put all these things together in our farming systems.”

McIvor says that to date the Government can be criticised for not having struggled to look at these things in a holistic way.

Government ministers and industry leaders are standing shoulder to shoulder in support of the deal.

Prime Minister Jacinda Ardern says the agreement is a world first and moves NZ closer to its goal of becoming the world’s most sustainable food producer.

“We need a plan that supports our environment… and our primary sector. A plan that is practical innovative and achievable,” she said.

Climate Change Minister James Shaw is equally upbeat, describing it as a huge step forward in NZ’s collective effort to combat the climate crisis. Shaw says they could have forced the sector into a pricing regime that it was completely allergic to and that would have been unsustainable.

He says the agreement reached reflects a level of consensus that has never been reached in NZ before.

“Our farmers are among the most adaptable, competitive, efficient, productive and innovative in the world. We are the first country to legislate the pricing of agricultural emissions. The world is looking to us for leadership and we will be the first to make it ok for others to follow,” he said.

Agriculture Minister Damien O’Connor joined in the self praise, describing the consensus as historical although not perfect. He says if there is one sector that recognises the value of cooperation it is the farming sector.

“Where we cooperate we succeed. Consumers are increasingly wanting to know that what they buy is good for them and good for the world. What we are doing is putting a price on emissions that will incentivise best practice in farming to build on our reputation as the best farmers in the world.”

O’Connor says the agreement is a huge opportunity.